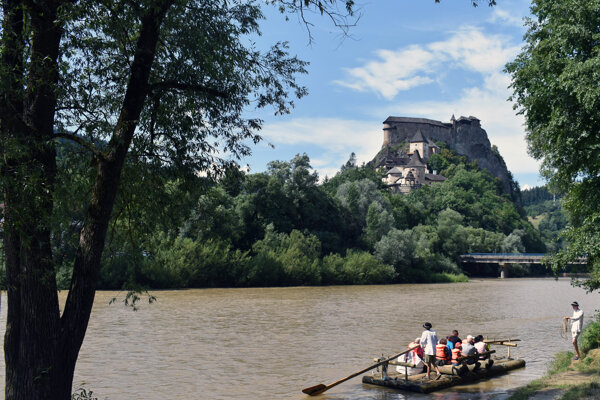 Tourists raft on the Orava river in the village of Oravský Podzámok, which is home to Orava Castle. (Source: Peter Dlhopolec/TSS)
Font size:A-|A+  Comments disabled

The Orava region, spreading in the north of central Slovakia, boasts one of the country’s major landmarks, Orava Castle, where the legendary 1922 film Nosferatu: A Symphony of Horror was filmed.

However, this attraction is not what lures long queues of locals every day.

Many of them travel to one of the major regional towns, Dolný Kubín, to have a scoop or two of ice cream from the Callo ice cream parlour, and they do not mind waiting in line on a scorching day.

“This is the most delicious ice cream I’ve tried in my life,” Tamari Mikatsadze, a Georgian volunteer based in the town, said. Her Georgian friend and volunteer Tatia Basilaia agreed with a nod. 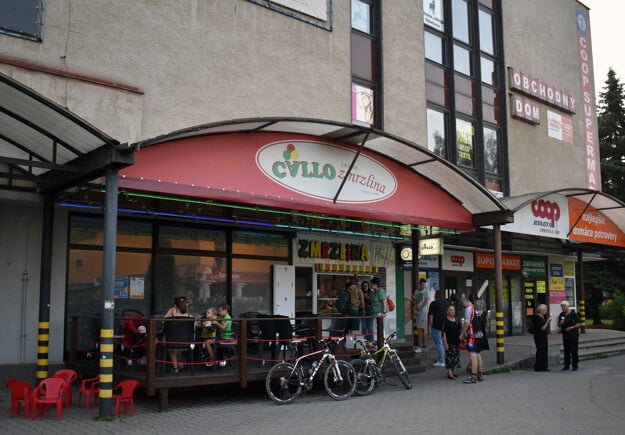 People wait in line for the best ice cream in Dolný Kubín, and arguably the Orava region. (Source: Peter Dlhopolec/TSS)

Dolný Kubín, in which several places are named after the famous Slovak writer Pavol Országh Hviezdoslav, is a small and quiet Slovak town. Despite not being touristy, it is a good starting point for trips around the region.

The huge and architecturally stunning Orava Castle, built on a high rock in the nearby Oravský Podzámok village, was one of the things that Basilaia had come across on the Internet before she moved to Slovakia. So, she gave it a go.

“I really enjoyed it,” she said, noting history buffs would definitely like the place.

After an exhausting tour of the castle, visitors can stop by the small Kastelán brewery right below the castle and try local beers. Some of them bear the name of noble people such as Juraj Thurzo, who owned the castle, and Hungarian King Matthias Corvinus.

Just a stone’s throw from the village, in Horná Lehota, adventure-seekers may go rafting on the Orava River in traditional wooden rafts. This nearly one-hour thrilling journey ends in Oravský Podzámok, in a spot with the best view of Orava Castle. 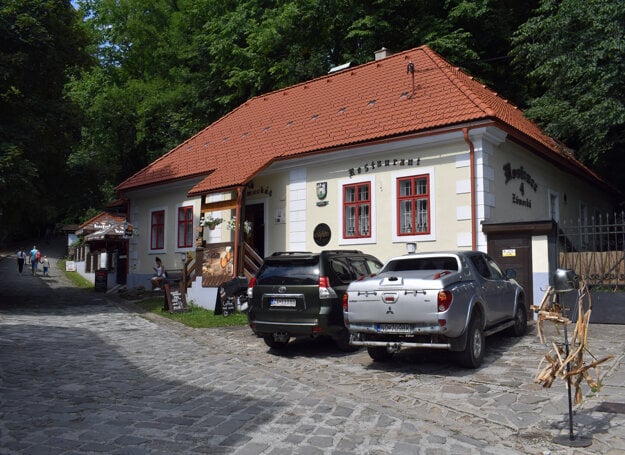 “The ride is something unique, which not many countries offer,” Vladimír Klocok, a native and a thrill-seeker from the village of Vyšný Kubín, claimed.

Before tourists decide to raft on the river with guides wearing traditional clothing, they had better check the strength of their voices. Under a bridge near the castle, they will be asked to shout “ahoj” to hear the loud echo of their voices.

Known for its hilly terrain, tourists can hike up and down the Orava region as well, including the highest peak of the region Baníkov in the Western Tatras. One of the most sought-after hiking areas of this mountain range is called Roháče. The area is favoured by skiers, too.

“In Roháče, you feel you are in the mountains,” Klocok said.

Since he grew up in Vyšný Kubín, his favourite hike leads to the splendid Veľký Choč peak in the Chočské vrchy hills. The skiing and ski mountaineering enthusiast also lists the Kubínska hoľa hill, which oversees Dolný Kubín, as his favourite place.

“I have been skiing there since I was a little boy,” he said. Today, he works for the Kubínska ski park, which runs different services and activities outside of winter, such as a zip line, paragliding, and a bike park. 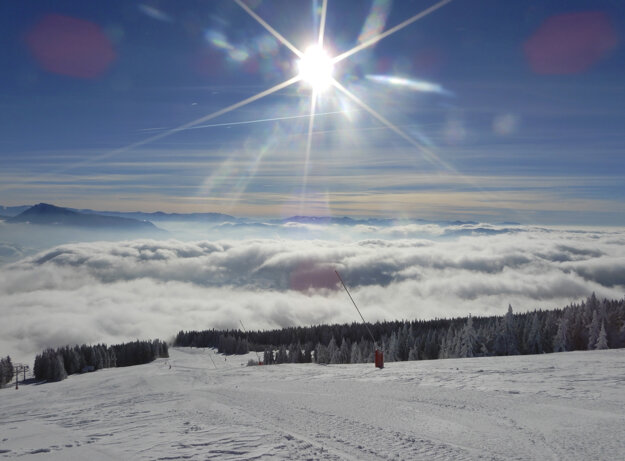 The Kubínska ski park above the town of Dolný Kubín. (Source: Miroslava Siváková/TASR)

The northern part of central Slovakia, which includes the Liptov, Kysuce and Orava regions, is indeed well-connected through a century ride of 119 kilometres.

Cyclists can also bike from the town of Trstená – famous for its pottery - up to the Polish town of Nowy Targ. Many Slovaks come here to do their shopping ahead of Christmas.

On a bicycle, people can also get from the Oravská Lesná village, one of the coldest places in Slovakia, to an extraordinary tourist attraction situated in the rural locality of Tanečník: a forest railway.

It is easier and faster to reach the sight by car, nevertheless.

Pinocchio in a forest

“This railway was used only for the transportation of wood and was built in 1918,” conductor Jozef Ferenčík said. Only a few kilometres of it have been preserved to date. 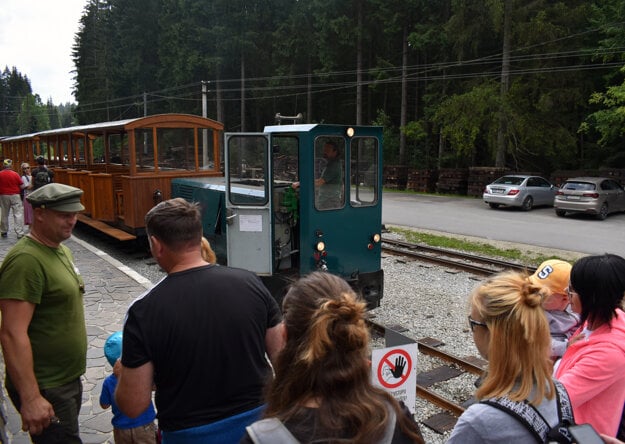 Conductor Jozef Ferenčík checks visitors' tickets before they get on the forest train. (Source: Peter Dlhopolec/TASR)

The one-hour train ride takes visitors through a forest, in which fairytale characters hide, up to the Beskyd saddle. Here, tourists can enjoy views, cows, and peace of mind.

A small museum, which will house an exhibition on the life of Gorals – highlanders living in the Orava region and southern Poland – is currently under construction by the hilltop Beskyd station.

However, the dominant feature of the region, in addition to Orava Castle, is the massive Orava water dam with a new waterfront built by the town of Námestovo. Because of its construction, several villages and parts of the town were flooded in the 1940s and 1950s.

The Slanica ship, which starts cruises from the Slanická osada settlement, takes tourists around a bird island and to Slanica Island, where a church and a calvary can be found. 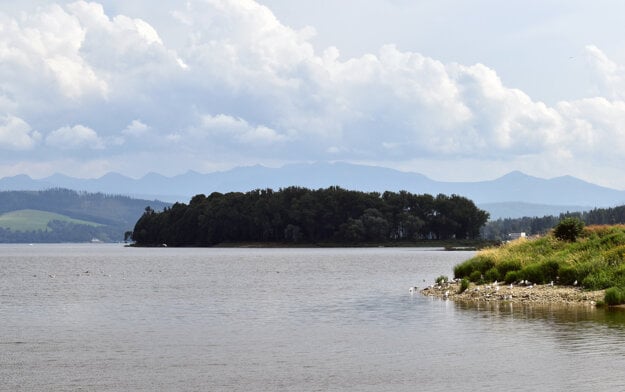 A piece of the bird island (right) in the Orava water dam and Slanica Island in the background. (Source: Peter Dlhopolec/TASR)

Many other alluring corners, including Rio de Klin with a high statue of Jesus, are scattered around the historical region of Orava, waiting to be explored by tourists from all over the world.

No wonder a well-known folk song about the region is called “Orava is good.”