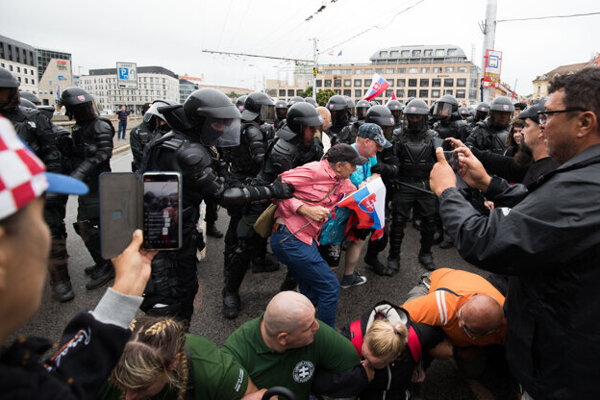 Police had to pacify protesters who tried to block the road near the Presidential Palace. (Source: SME)
Font size:A-|A+

The protest gatherings held in the capital on August 5 were much calmer than last week. Only dozens of protesters came together on a rainy Thursday, and just a few minor incidents marked their protest.

The situation near the Presidential Palace was monitored by the police in heavy armour, after the protest's organisers, including the far right ĽSNS politicians, announced that they were going to try and block traffic in the capital. 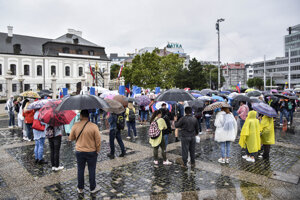 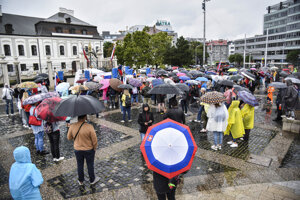 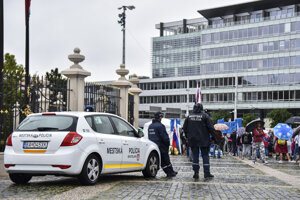 A group of demonstrators protesting against vaccination against Covid and restrictions related to the pandemic, blocked the road near Hodžovo Square in Bratislava towards Palisády for a few minutes.

After the police intervened, the road was clear again, with some traffic tailbacks occurring immediately after the incident.

Two people were detained, while one protester and one police officer were injured during the incident. The protester was taken away by ambulance, the Sme daily reported.

The police later specified that they detained three people, including the brother of far-right ĽSNS chair Marian Kotleba, Marek Kotleba, but they were released.

The Dopravný Podnik Bratislava (DPB) company, which operates public transport in the capital, announced temporarily suspending the operation of the trolley buses number 203, 207 and 212 in the area.

Meanwhile, another demonstrator wanted to start a fight with police officers, but was pacified within five seconds, Sme wrote.

The participants in another protest, held at Námestie Slobody (Freedom Square) near the Government's Office, also tried blocking roads but the police stepped in.

Dozens of police officers pushed the crowed back to the pavement, preventing them from blocking the road. The situation was monitored by the anti-conflict police team as well, according to Sme.

Another road blockade occurred on Panónska Cesta in the borough of Petržalka in the morning hours, with several public transport lines blocked for about 20 minutes.

"However, the police solved the situation quickly and restored traffic," said the Dopravný Podnik Bratislava (DPB), the public transport operator in the capital.