Bojnice Castle’s Golden Hall is arguably the most famous room in the complex. 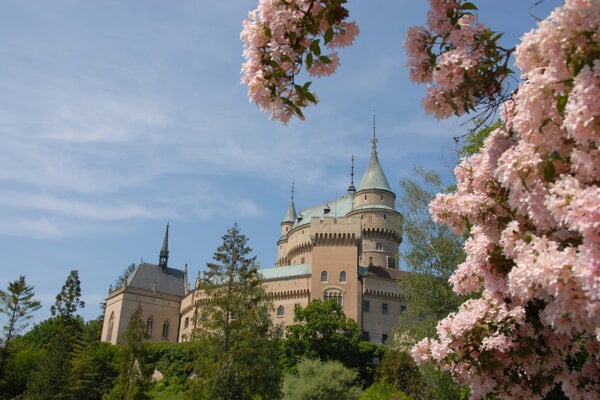 Bojnice Castle is located in the heart of the town of Bojnice, surrounded by numerous buildings and shops below.

Where most other castles found across Slovakia sit atop hills a walk away from the town below, Bojnice developed its town around its castle, and its enormous figure is visible from the streets nearby. A fairy-tale castle with peach-coloured outer walls and impressive neo-gothic turrets, Bojnice Castle is a gem in the Upper Nitra region.

Nearly 1,000 years old, the castle’s first written mention was in 1113, when a wooden castle stood in its place. Over the years, the castle was rebuilt with stone, and throughout the centuries has remained in the hands of royalty.

The castle’s best-known owner was the Pálffy family, who took over the castle in 1637. Renowned throughout Slovakia for their illustrious upkeep of castles, the Pálffy legacy features gothic, Renaissance and baroque hallmarks, and they owned the castle for 300 years. The castle’s current appearance is the work of Count János Pálffy, whose 21-year reconstruction was inspired by a mixture of the gothic architecture from southern and central French chateaus and early Renaissance Italy.

The rich mahogany beams which make up the ceilings of the castle are a common feature, and their impressive façade adds a darker twist to the castle’s great halls. A keen collector of art, Pálffy adorned the many halls and chambers of the castle with numerous portraits and artefacts, ranging from numberless portraits of Hungarian kings and queens painted directly onto the walls in the blue room, to an Oriental room whose vase collection could outshine even the most ardent of ceramic collectors.

The Oriental room, used originally as a workroom, was adapted by Pálffy using old Turkish panelling to line the walls, colourfully painted with Arabic calligraphy across each panel top. 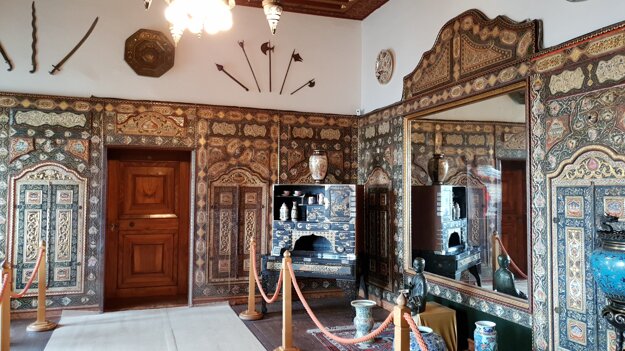 Bojnice Castle (Source: Jana Liptáková)
You have just exceeded the number of devices allowed.
Your active subscription only allows a limited number of browsers to access locked content.
To continue reading this article on this device/browser, please edit the list of registered devices in your profile settings here:
manage devices
You can read all about device management here.