Music is a meeting point for the Roma and Slovaks

Despite the yawning gap between the Slovak majority and the Roma minority, Roma music does not suffer from acceptance issues and continues impacting Slovak artists to this day. 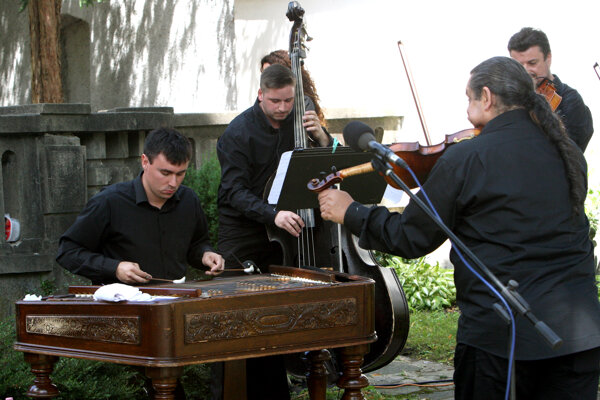 A wedding without Roma music was quite unimaginable to the ancestors of today’s Slovaks. The catchy rhythms, swift movements and colourful fabrics of the dancers’ clothes are still the first things that come to mind when Roma culture is mentioned.

For centuries music has been the link between the Roma minority and the majority inhabitants of Slovakia, even though in other areas of life negative stereotypes continued to prevail and sustain the gap between the Roma and the non-Roma living side by side in Slovakia. Despite the distance, the cultures have been impacting each other more than most people would be ready to admit.

“All the cultures were impacting each other all the time, Roma culture being no exception. It is like that even with cultures that claim not to communicate with each other,” Alexander Mušinka, an expert in Roma studies of Prešov University, told The Slovak Spectator.

The mutual penetration of Slovak and the Roma cultures has not been systematically researched. René Lužica, an expert on Roma studies of Constantine the Philosopher University in Nitra, says that Roma culture is a symbiosis of cultures taken over by the Roma people, who in turn applied their own interpretation to it. That is why there is no such thing as a “pure” Roma ethnic culture, not even in India.

At the same time, just as the Roma are rejected by majority society, their culture is also rejected and underestimated, according to Lužica.

Gap on the market

The biggest impact between the cultures could be observed in the music, Mušinka explained. In fact, the music culture in Slovakia owes a lot to the Roma – and not just Roma wedding bands.

“Such styles like Czardas and cymbalo music, originally from the Hungarian territory, were brought to the territory of today’s Slovakia by Roma musicians,” said Mušinka.

How come Roma were the ones best able to learn new musical styles and become skilled musicians? One of the explanations lies in the ownership of land and the lifestyle that came with it. While the majority inhabitants of what is now Slovakia would often own small fields that would not suffice to feed their families, they were forced to take up other jobs besides agriculture, such as on construction sites or in factories, leaving no time for other activities, Mušinka explained.

Music is time-consuming, requiring a lot of training and regular practice. Roma inhabitants who did not have their own fields had more time on their hands to make musical instruments and play music.

“Today, we would say the Roma found a gap in the labour market and filled it,” Mušinka added.

The impact of Roma music is particularly apparent in the instrumental part of Slovak folk music, noted Jana Belišová, an expert on Roma music of the Musicology Department of Comenius University in Bratislava.

“For example, in the Horehronie region in central Slovakia, Roma musicians were often part of the folk music band playing Slovak songs,” Belišová told The Slovak Spectator. Their style significantly impacted the performance of music bands in this region.

In the second half of the 19th century, folk music helped raise Slovak national awareness, which is why skilled interpreters were really appreciated, the musicologist said. Some Roma virtuosos were considered the best performers of Slovak folk music in the past.

Such was the first Roma violinist Jožko Piťo, who lived in Liptovský Mikuláš in the 19th century and who used to play and transform Slovak folk songs. While some people had a lot of respect for him, others accused him of corrupting Slovak folklore with his "Roma interpretation," Belišová said. Piťo’s sons followed in his footsteps.

The infiltration of feelings

Roma inspiration is definitely finding its way into contemporary Slovak music – a Roma melody, a Roma lyrics, or just some rhythmic element or interpretation method. That was how they contributed to the creation of flamenco or Hungarian music genres like csardas.

Belišová describes Roma music as very varied, dynamic, with changes in time and environment also according to the function it plays. She noted that it is debatable whether Roma music should be defined as music played by Roma, as traditional Roma music, music they play for an audience or a song Roma people sing for themselves when they are at home.

The latter remains largely unknown to the wider public, although not due to acceptance issues.

“Music is something the vast public usually does not have a problem accepting,” Belišová said and explained; it is rather the intimacy of these songs and the isolation of the Roma communities that sing and play for themselves.

“In order to get to know Roma ‘music for yourself,’ it is best to make friends with a Roma and take part in their playing, singing and dancing at home. I can confirm that it is an unforgettable experience,” Belišová noted.