The highway operator is introducing a system allowing speeds of up to 130 km/h on the bypass. 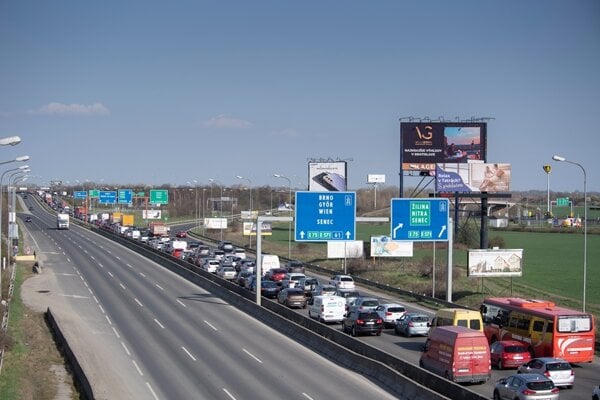 People can drive their cars at up to 130 km/h on the Bratislava bypass as of Wednesday, August 25. This change is part of the smart highway system launched by the National Highway Company (NDS). The new system is designed to significantly reduce the size and occurrence of tailbacks, improve the flow of traffic and increase road safety.

Bratislava Mayor Matúš Vallo objects to the change, claiming that it could have disadvantages too.

“Higher speeds cause higher noise pollution and emissions directly in the city; in some cases, only tens of metres from apartments and houses," Vallo wrote on social media, adding that an increase in speed on the city highway could lead to the exclusion of public transport vehicles from the bypass.

The Dopravný Podnik Bratislava (DPB) public transport operator already has a temporary exemption to the minimum permitted speed for buses valid until August 2022. In other large cities, speed limits are being reduced on inner-city highways, Vallo noted.

Vallo stressed that it would be a big problem for the city if public transport vehicles were excluded from the bypass due to the higher maximum speed on the highway. This would mean huge time losses for passengers and a significant increase in the cost of operating public transport. Several public transport routes that currently use the motorway bypass would need to be re-routed, and for some of them, there is no logical alternative.

“In the case of traffic closures, the possibility of bypasses for public transport would also be radically reduced,” Vallo said.

The smart highway system can increase the capacity of individual sections of the D1 highway with an increased rate of traffic congestion by 10 to 20 percent. This is expected to increase the flow and speed of traffic. The maximum permitted speed of up to 130 km/h, which is valid on the complete stretch of the D1 highway in Bratislava from August 26, will be displayed but also regulated by traffic signs. The speed, together with warnings and restrictions, will be automatically updated on the traffic signs based on data acquired by as many as 178 sensors. During peak hours drivers must count on significant speed reductions.