Good evening. The Monday, September 13 edition of Today in Slovakia is ready with the main news of the day in less than five minutes. We wish you a pleasant read.

The Pope in Slovakia: This journey fills me with energy 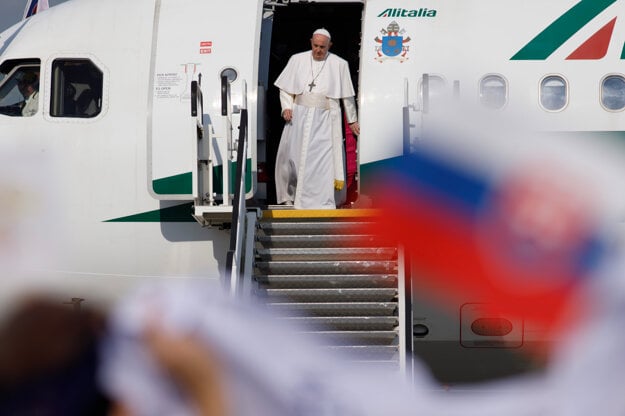 Pope Francis arrived for his first visit to Slovakia on the afternoon of September 12, after spending half a day in Budapest. Follow updates about his visit on the special section of our website.

The pope was welcomed with the traditional tasting of bread and salt at Bratislava airport, and received a bouquet of flowers typical for Slovakia.

Hundreds of people welcomed him at Bratislava airport. The highest constitutional representatives included President Zuzana Čaputová, who invited the Pope to Slovakia in December 2020.

“When asked how he is doing, he answered that he feels like he is becoming younger again, because this journey fills him with energy,” President Čaputová noted. 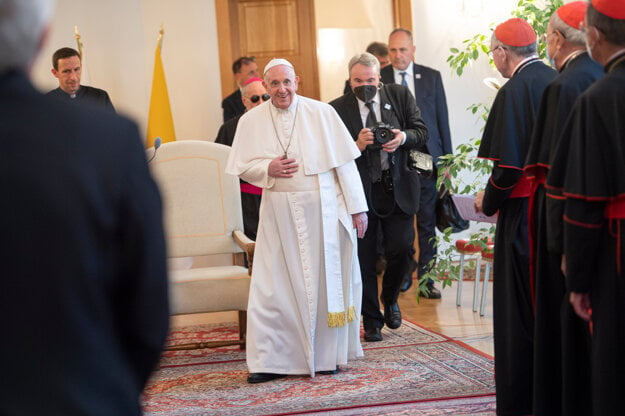 Later in the afternoon, an ecumenical meeting was held at the apostolic nunciature in Bratislava. In his speech, held during the meeting, Pope Francis thanked the representatives of the Church for coming to meet him. He called himself “a pilgrim in Slovakia.”

He repeated these words on Monday, when he arrived to the Presidential Palace to meet President Zuzana Čaputová again. Speaking in front of a crowd of 500 personalities of the political, religious and social spheres gathered in the garden of the Presidential Palace, the pope noted that the history of modern Slovakia is a message of peace in the centre of Europe.

“We need a brotherhood to be able to support integration.” Pope Francis mentioned solidarity, the need for integration and peace. 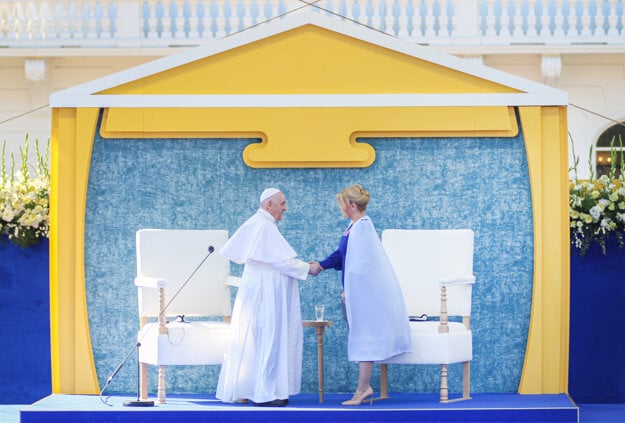 The Pope and the President exchanged gifts. Čaputová gave several gifts to the pope, including a symbolic loaf of bread, a book, honey from the Presidential Garden, charging stations for electric cars, as well as medical equipment for the Vatican Fund, which helps fight the pandemic in the poorest parts of the world. Pope Francis gave President Čaputová a medal referring to his ongoing visit to Slovakia.

Later he met with bishops, priests, religious, consecrated persons, seminarians, and catechists at the Cathedral of Saint Martin in Bratislava. He called on priests not to use words that do not touch people when talking to adherents. 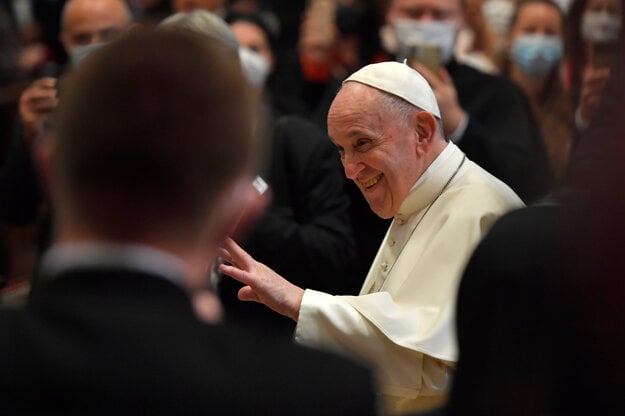 The pope meeting with bishops, priests, religious, consecrated persons, seminarians, and catechists at the Cathedral of Saint Martin in Bratislava (Source: TASR)

Speaking during the meeting with bishops, priests and consecrated persons in the Dome of St. Martin in Bratislava, the pope recalled a Slovak proverb when he said that "we need to break the chain of revenge."

On Monday afternoon, Pope Francis visited the Bethlehem Centre in Petržalka, Bratislava. He was welcomed by the head of the centre from the Congregation of Mother Teresa. The love missionaries are involved in charitable activities, especially with an emphasis on helping homeless people. In the building of the former kindergarten, they also offer refuge for the ill.

The Pope thanked the sisters for their service. "Even when we are suffering through trial, the Lord is always among us, He will never leave us. Never forget this, even in difficult times," he encouraged those present.

Later in the afternoon, he met representatives of the Jewish community. A short private audiences with PM Eduard Heger and Speaker of Parliament Boris Kollár are planned at the nunciature in the evening. 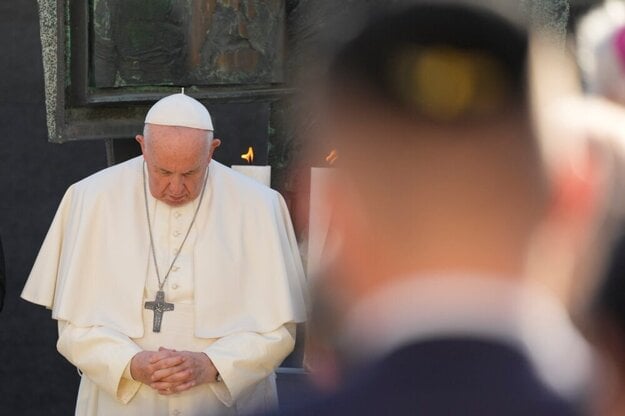 Pope Francis at the Rybne Square in Bratislava (Source: AP/TASR)

On Tuesday, the Pope is travelling to eastern Slovakia, for a visit to Prešov and Košice, including a stop at the biggest segregated Roma neigbourhood in Slovakia, Luník IX.

Registration for events with the Pope were closed as of Sunday night. More than 100,000 people applied, the vast majority registered as vaccinated. The events were originally available only for vaccinated people, which changed one week prior to the visit. 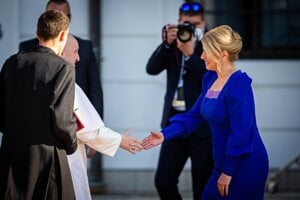 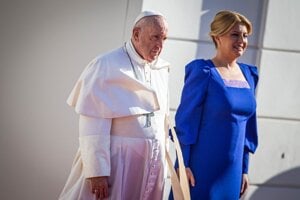 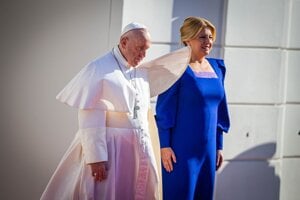 Coronavirus and vaccination in Slovakia 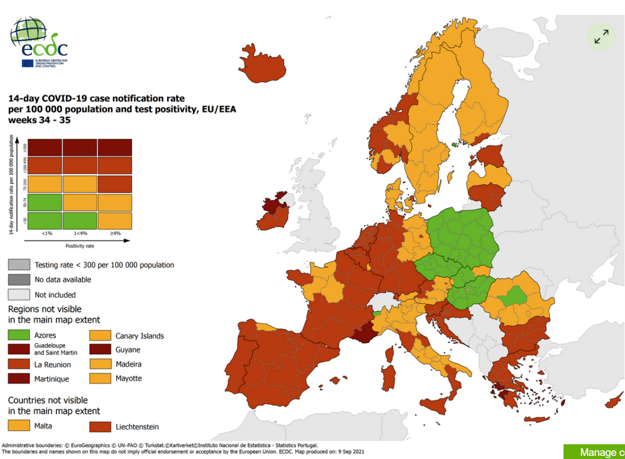 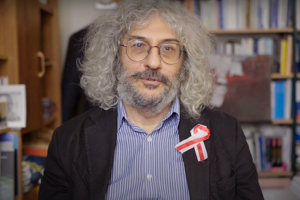 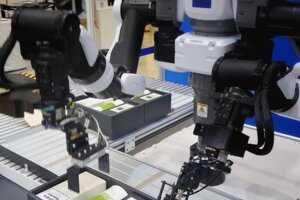 AI has potential for the future. Slovakia just needs to use it Read more 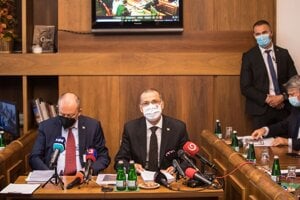