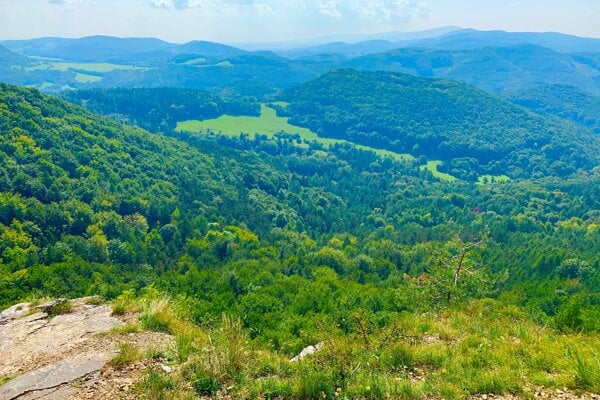 The 1952 Summer Olympics in Helsinki.

An inconspicuous runner, Emil Zátopek, won gold in the 5,000 and 10,000 meter runs, but his final medal came when he decided, at the last minute, to compete in the first marathon of his life. He was nicknamed the "Czech Locomotive".

There was a woman in the stadium cheering for him. His wife, Dana.

She was also an athlete and won a gold in javelin.

But he was the star. And she stayed in his shadow.

Was she a hero? Absolutely!

Once a white deer appeared in the forests of Trenčianske Teplice. And the cruel governor of this region wanted to hunt it. He didn't know that the deer was actually his beautiful wife. A wood nymph had cast a spell on her, which only the softening of her husband's heart could break. It was the only way she could help herself and the people. Every night she became a white deer. But the story didn't end happily.

Was she a hero? Or was she an illusion?

Illusion, heedlessness, charm, elegance, and a hint of mystery. And decadence.

This invisible, but still present feeling is in the air over spa areas.

You can sense it in Baden, a place where Beethoven, Mozart, and Liszt found their inspiration. And where, in 1934, the first Austrian casino was opened, a place of frivolous joy. Or in Biarritz, where Coco Chanel launched her first fashion house. Or in Karlsbad, now Karlovy Vary. A place where the recipe for the famous Becherovka is owned by just two people. And where, each year, movie stars walk on red carpets.

Trenčianske Teplice also has this magic.

It is among the oldest and most beautiful spas in Slovakia, thanks to its wonderful healing waters and romantic surroundings.

For many years the Art Film Fest was home here. And on the Bridge of Fame, several beautiful divas, such as Catherine Deneuve or Ornella Muti, were photographed.

Sounds the same, but not the same

Beautiful are also the Strážovské vrchy mountains which surround the spa.

Let's get lost there! Let's be enchanted by their charm and illusion!

A 15 km long hike with an attitude of 800 m is interesting not only for tourists, but also for runners and cyclists. 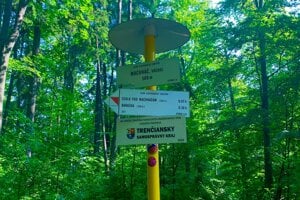 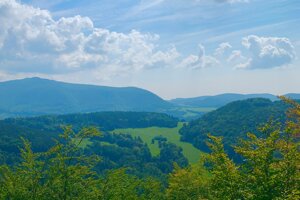 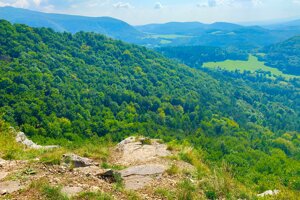 Trenčianske Teplice and its surroundings (9 photos)

Our first stop will be the 569 m high Machnáč mountain.

Machnáč mountain is situated not only in the Strážovské vrchy mountains, but also in the White Carpathians, in the Czech Republic. Machnáč is also a river in the Strážovské vrchy mountains, and a student beer house in Bratislava. Machnáč is a sanatory in Trenčianske Teplice too, designed by the famous architect Jaromír Krejcar.

The second stop will be Klepáč mountain.

The 575 m high Klepáč mountain is the highest mountain of Trenčianske Teplice. Klepáč is also the eighth mill on the Vydrica river in Železná Studnička, a part of the Bratislava city forests.

The next stop, Sokolovica, is an observatory point over the Kamenická dolina valley. A place with a similar name Sokolica, was one of our stops a few months ago in Pieniny. Before hiking to Sokolovica we will pass Baračka, an area connected with the Baracskay noble family.

Jeleň, or Deer observatory point, is located above the Jelenia skala rock, our next stop. The legend of the wife who became a White deer is associated with this point.

And where will we end our trip? In the Kýšky mountain meadows, which are a favourite of hikers from Dubnica, Nová Dubnica and Trenčianske Teplice. It is a crossroad of hiking paths. Once, Opatova horáreň hunting house with its fruit trees was located here, but only the ruins remain.

Is it possible, or only an illusion?

Allyson Fenix kept going. At 32, she was one of the most decorated athletes in history: a six-time Olympic gold medal winner and an 11-time world champion.

At the last Olympics in Tokyo she won bronze and rewrote history. She is even more successful than Carl Lewis.

But the most powerful contest she won was against Nike.

Firstly an illusion, later a reality.

After her intervention Nike changed its policy to guarantee salary protections for its pregnant athletes and mothers.

Allyson Fenix is a hero.