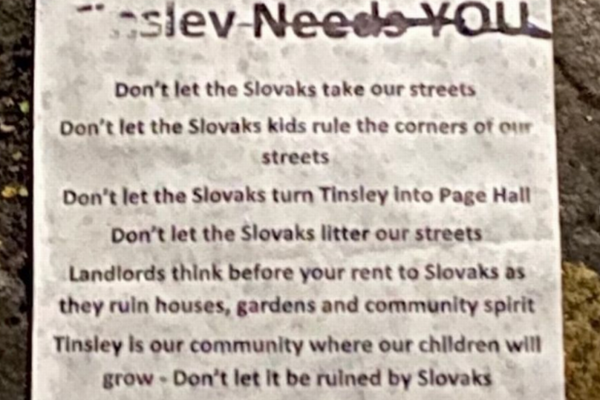 The Slovak community living in Tinsley, a suburb of north-eastern Sheffield, faced verbal abuse earlier this year, when anti-Slovak posters were pinned to walls in the area.

“Tinsley needs you. Don’t let the Slovaks take our streets,” one of the posters told residents, as reported by South Yorkshire Live.

The hateful posters accused Slovaks of littering streets, causing problems for the elderly and families, and ruining houses and the community spirit.

“Let’s not lose our community and become like Page Hall,” another poster read. Page Hall is an area in Sheffield notorious for gang violence and street brawls.

Condemning the posters, Councillor Mary Lea told the website those sentiments were not shared by Tinsley inhabitants, adding that the posters were removed as soon as they were put up. 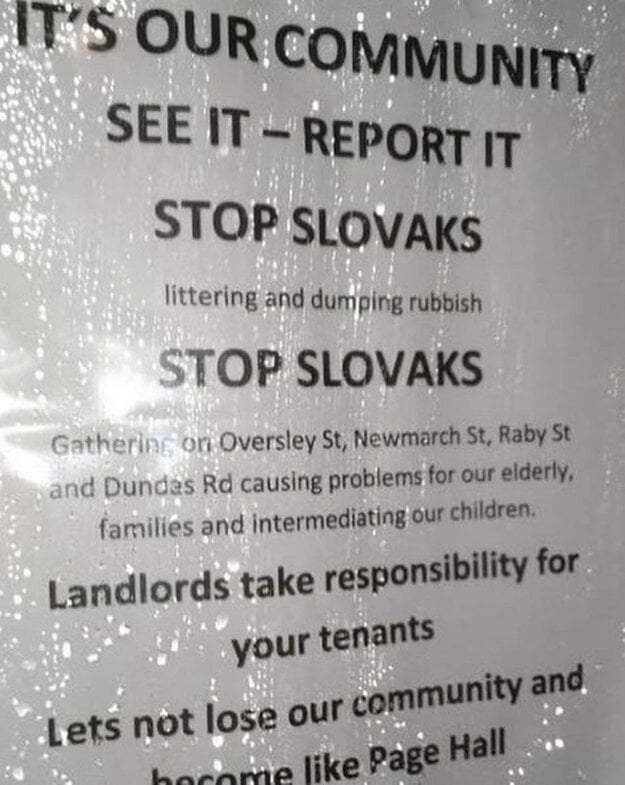 By now, more than 1,800 comments have appeared under a picture of one of the anti-Slovak posters posted by Sheffield News on Facebook, calling it a 'racist' and 'despicable' poster. (Source: Facebook/Sheffield News)

The Slovak community, which includes some Roma members, has been well-established in Tinsley for several years, the councillor also noted.

“I know people in Tinsley are not asylum seekers or refugees. They have come over as part of the EU and lived there for 15 years, established themselves in the area - one of the first places they came to was Tinsley,” Lea said.

Although the posters were reported to the police, no one knew who was behind them.

“It might just be one person wanting to try and cause a bit of a stir, but we do not know. I hope it stops,” Lea said in January.

At that time, the police told South Yorkshire Live: “Police have received several reports from the community in Tinsley about the posters and enquiries have been undertaken to identify those responsible for posting them.”

The Slovak Spectator approached South Yorkshire Police to ask if they managed to identify those responsible. They said: “The investigation into this is still ongoing, however no arrests have been made at this time.”

The first anti-Slovak posters emerged in the Sheffield suburbs shortly before last Christmas.