Moka pot and tomatoes. How to be an Italian in Slovakia

The most frequently asked question they have to answer is: Why on Earth would anyone choose Slovakia over Italy? 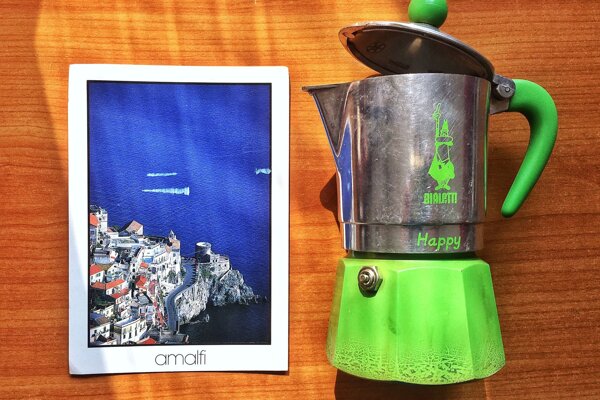 Slavín, Slovak Radio, Petržalka or St Martin's Cathedral with the UFO above SNP Bridge in the foreground: all these iconic buildings of Bratislava have stood as models for Matteo Sica, an Italian painter living in the Slovak capital. Although his works depict Bratislava, they always carry a piece of Italy.

“I illustrate the city of Bratislava and other interesting and special places in Slovakia with a very happy and pleasant light, and with the typical colours of my home in the south of Italy,” he explained. Next to red and green, his paintings are bursting with the blue of the sea, the dark colours of the mountains, and the yellow of the lemon trees of the Amalfi coast.

Sica is one of the many Italians living in Slovakia who are trying to not just preserve their Italian culture for themselves, but also share it with Slovaks, mostly via their native language and the food of their homeland. 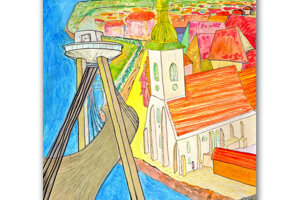 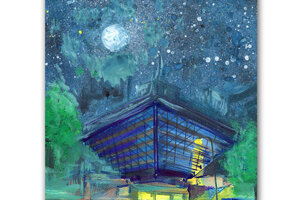 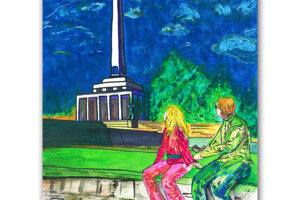 The number of Italians living in Slovakia has steadily grown over the past 20 years, found in many walks of life beside language teaching and gastronomy: in the energy sector, construction or banking and financial services.

Slovakia's immigration authorities registered a little over 3,000 residence permits issued for Italians to live in Slovakia by the end of June 2021. This number does not include second-generation Italians who are Slovak citizens.

Sica first came to Slovakia for a three months’ professional internship at the Italian Embassy in Bratislava. That was ten years ago, and Sica has since made the country his home. He ended up finding a large network of friends and colleagues in Slovakia, even though Bratislava was not his chosen destination when he arrived. Many of the thousands of Italians living in Slovakia now tell a similar story.

A native from the seaside southern-Italian city of Salerno, Sica is often asked with genuine curiosity why he chose Slovakia as a place to live instead of Italy. The truth is that he first arrived to Bratislava by chance, when he was offered a job when his application for an internship in Canada and Sweden was turned down. But that is not what he normally answers.

“I smilingly answer that ‘I came here from southern Italy to learn how not to be lazy and become a committed hard worker,’” Sica jokes.

For Andrea Ena, it's also the question people in Slovakia ask him most frequently. He first visited Slovakia in June 2002, and one year later he came to live here. Initially, Ena moved from his native island of Sardinia to the northern-Slovak town of Ružomberok, and only later moved to the capital.

“Fate wanted it this way and now I'm still here,” he replies.

Ena has since become a renowned chef and today owns two Italian restaurants in Bratislava, both popular places for encounters among the Italian community. The Italian-Slovak Chamber of Commerce organises its “good food and good wine” events there as well, Ena said.

Maintaining contact with his homeland is still crucial for Ena, who is sure that he will always be Italian.

“We have our mentality, maybe stubbornness, and also our culture of food and fashion,” Ena said. “Fashion and gastronomy are a symbol and guarantee of Italy. Pasta, pizza and tiramisu are a must.”

The smell of coffee

Periodic melancholy and homesickness are part of a foreigner's package, said Sica. When he feels that he misses the sunny Amalfi coast and his family who lives back in Italy, he tries to fight against these feelings with a postcard of his beloved place. His green moka pot, which he calls macchinetta, is a reminder of home and a weapon against homesickness.

“It is typical for Napoli coffee culture and has ‘happy’ written on it,” he noted. “It is the first thing I grab in the morning and the smell of the coffee makes me feel like home.” 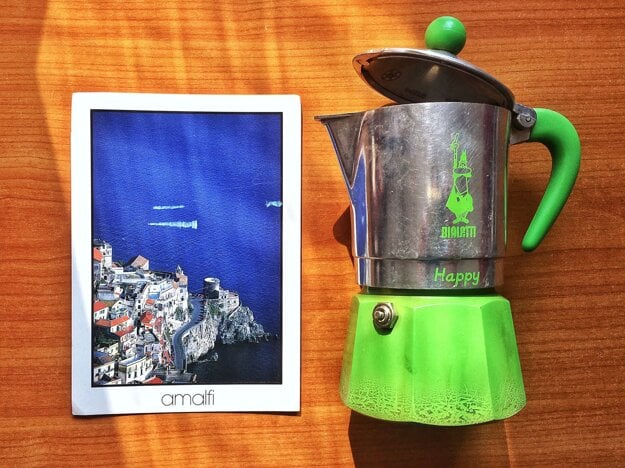 Finally, good thoughts of Italy and his native region, Campania, come to Sica when he sees and smells fresh tomatoes in the fresh market on Žilinská Street where he is a regular. “That is one of the things that make me feel happier and make me feel at home when I'm here.”

Besides being an illustrator, he is also a writer and teacher at the Italian Institute of Culture, a daily connection to the "musical language," as he calls his mother tongue, and the culture of his homeland.

Italian language courses remain popular among Slovaks, and Sica admits that other people's interest in his language and culture is very welcoming.

“When there is genuine interest and curiosity that makes you feel accepted and welcomed, there is a kind of spontaneous friendship,” he opined.

While these emotions are shared by Ena, he stresses that although it has been 18 years since he moved to Slovakia, his relationship towards Italy has not cooled and never will.

“I return there regularly anytime I can. Italy remains number one in my heart,” he summed up.