Traffic jams in Bratislava after parts of the ring road open

The transport minister met with representatives of affected city boroughs and villages. 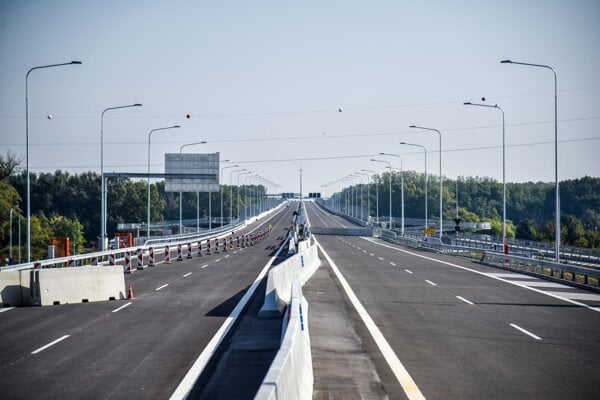 Some parts of the R7 express road and D4 highway are being waited on so that they can open in their entirety, but traffic jams will persist until then.

“After [the construction is complete], we will look for solutions to traffic jams in Bratislava in tandem with self-governing administrative bodies and the police,” Transport Minister Andrej Doležal (Sme Rodina nominee) said after meeting with representatives from the affected villages and boroughs on October 4.

A discussion was held about problems and solutions for what may arise with the opening of certain parts of the ring bridge in certain villages or Bratislava boroughs.

“We asked an important question, and that was whether or not we did our homework well. Whether or not the city and city boroughs were ready for the construction of the ring road,” Doležal stated.

Vladimír Letenay, the mayor of the Ivanka pri Dunaji municipality just outside Bratislava, expressed his dissatisfaction with the current state of traffic. He requested that the Transport Ministry immediately forbid all entry and exit from the D4 highway at the Ivanka-West intersection until the Ivanka-North intersection is completed. He also requested the faster conversion of the I/61 road from Senec into a 4-lane road.

Bratislava Mayor Matúš Vallo admitted to a worsening of traffic in certain parts of Bratislava due to the opening of the D4/R7 segments.

Transport Minister Doležal stated that he would like to wait for the situation to stabilise after opening the remaining segments of the ring road. He also stated that the current state of traffic around Bratislava is “catastrophic” and will remain so for some time.

The much-needed ring road, he claims, can only partially eliminate the problem.

“It is naive to think that we could improve the situation by simply shutting down a few key intersections around the ring road. What will truly turn the situation around for the ring road when we open the D1/D4 intersection. But until then we will have to be patient and propose only specific solutions in specific city boroughs,” the minister announced.

Vice-president for transportation matters in the Bratislava Self-Governing Region, Alžbeta Ožvaldová, views the expansion of the road from Senec into three lanes or the implementation of traffic signalisation as a few solutions to the poor state of traffic around Ivanka pri Dunaji.

The mayor of the Bratislava borough of Jarovce, Jozef Uhler, stated that the situation in his town, which was initially plagued by bad traffic ever since the ring road, has stabilised.

“In a few days, when drivers find new paths, we will see what sorts of traffic jams will form; we’ll observe where congestions ease up and on the other hand, where they will clear up,” the mayor stated. He believes the solution will need to comprise several different measures, rather than one cookie-cutter solution.

For example, he suggested changes to the intersection between Jarovce and the centre of Bratislava.