Most Slovak politicians hopeful about new Czech government, but opposition is sceptical 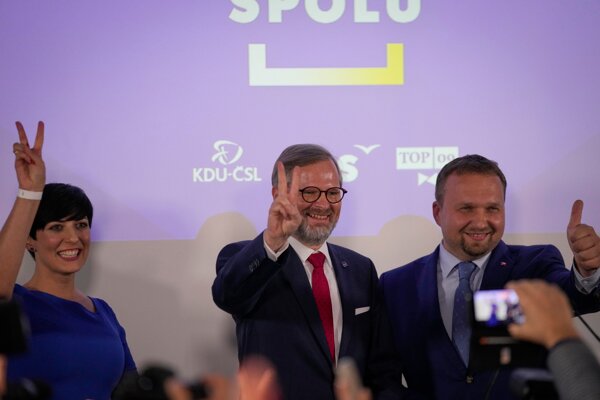 The leaders of three parties that are part of the winning coalition Spolu; l-r: Markéta Pekarová Adamová of TOP 09, Petr Fiala of ODS and Marian Jurečka of KDU-ČSL. (Source: AP/TASR)
Font size:A-|A+

Several Slovak politicians have congratulated the Czech Republic for the high turnout in its parliamentary election.

As much as 65.43 percent of eligible voters cast their vote in the election held on October 8-9. It was won by the Spolu coalition (comprised of three parties - ODS, KDU-ČSL and TOP 09), followed by ANO of the current PM Andrej Babiš, the liberal coalition Piráti/STAN (Mayors and Independents), and SPD led by Tomio Okamura.

While most coalition politicians welcomed the election results and expressed their hope for continuing cooperation between the two countries, the opposition was more sceptical of the potential ruling coalition comprised of the two coalitions.

Kollár would vote for Babiš

“Democracy needs our active presence,” Slovak President Zuzana Čaputová tweeted, congratulating the Czech Republic for the high turnout. “I wish you a successful and conflict-free process of forming the ruling coalition.”

He did not want to comment on the potential impact of the Czech election on the Visegrad Group (V4), comprised of Slovakia, the Czech Republic, Poland and Hungary.

“The relations in the V4 are good in the long term,” Heger said, as quoted by TASR.

Speaker of Parliament Boris Kollár (Sme Rodina) does not think the V4 would fall apart after the election. He said he respects the results although he admitted that “if I were a Czech, I would vote for Babiš.”

Most coalition politicians welcomed the election results. OĽaNO MP Juraj Krúpa said during the political talk show broadcast by the public-service RTVS on Sunday that we are experiencing a wave of tiredness with populism and extremism in central Europe. He also expressed joy when the Communists dropped out of the parliament for the first time since World War II.

Ondrej Dostál, an MP for Freedom and Solidarity (SaS), also welcomed the fact that the representatives of the Communist Party will not sit in the parliament, but he was surprised that the members of the ČSSD party, which used to rule in the past, did not make it to the parliament.

Peter Pellegrini of Hlas expressed regret that the Social Democrats did not make it into parliament because there will not be anyone pushing the social-democratic agenda. He expressed hope that regarding the mutual relations, the government of Slovakia and the Czech Republic will continue cooperating, as reported by RTVS.

Smer MP Richard Takáč was more sceptical of the election results, saying that the Czech voters did not learn from the post-election developments in Slovakia. He cannot imagine how a grouping of five parties would rule.

“The Czechs probably do not realise what is coming,” he told RTVS.