Hundreds of thousands in Slovakia have income below poverty line

Yet Slovakia belongs among countries with lowest poverty risk rates in Europe. 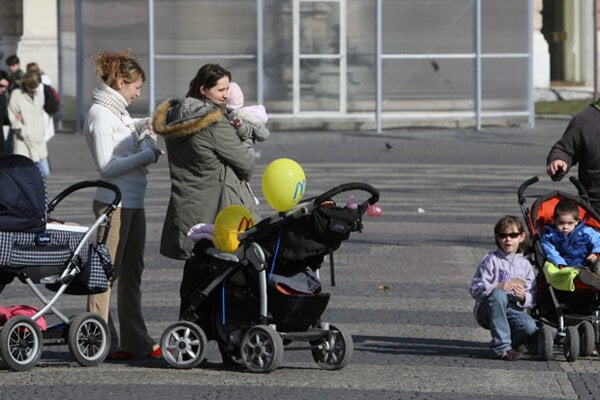 More than one tenth of Slovakia’s population are at a risk of poverty.

The statistics of the National Bank of Slovakia (NBS) show that 615,000 people, about 11.4 percent of the population, are at risk of poverty. Together with Czechia and Finland, Slovakia belongs among European countries with the lowest poverty risk rates.

While Czechia is the country with the lowest poverty depth, Slovakia ranks 25.2 percent on this indicator, which is somewhat above the EU 24 average of 24.5 percent.

That means that there are more families in Slovakia that have income further away from the poverty line, NBS reported as quoted by the TASR newswire.

Childless couples the best off

Households facing the lowest risks of poverty are composed of just two adults. On the other hand, the largest poverty risks are faced by households with three or more children, single parents with young children and individuals over the age of 65.

In comparison with the average of 27 EU member states, poverty risks in Slovakia are lower by five percentage points. The most resilient households are those with individuals below the age of 65, two adults and no children, from which at least one individual is over the age of 65.

Even though there is a relative difference between the wages and pensions of men and women in Slovakia, single women face a 3.5 percentage point lower risk of poverty than single men.

In comparison with the EU, households with single parents and at least one dependent child face an above-average risk of poverty. The poverty risks of a family with three or more children are threefold compared to families with just one child.

In a household comprised of two adults and two or more dependent children, there is a significant risk of poverty compared to other EU member states, with a score of 14 percentage points higher. One result of this is that when sorting by age, the group most at risk of poverty are children up to the age of 17.

In Slovakia, families with three or more children, particularly those coming from a worse socio-economic background, tend to belong to marginalised Roma communities as well. The risk of poverty in marginalised Roma communities, in comparison to the rest of the population, is higher by 76 percentage points, with children up to the age of 17 from this background also facing the most risks.

Since 2015, there has been a decrease in the risk of poverty for households composed of individuals up to the age of 65, and couples with 2 dependent children. The most striking poverty risks only became worse for individuals over the age of 65 and single people.