Every time I read a book, I imagine how to illustrate it

Take a peek into the world of Elena Odriozola, the Spanish illustrator who won the Bratislava Illustration Biennial 2021 Grand Prix. 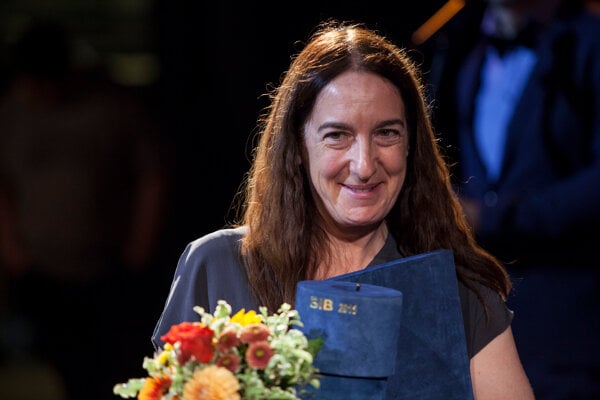 After the success of her illustrations as the runner up, Spanish illustrator ELENA ODRIOZOLA has won the 2021 Biennial of Illustrations Bratislava (BIB) Grand Prix for her illustrations from the book Mixed Feelings. This innovative children’s book is an illustrated introduction to philosophy, created in collaboration with her longtime friend and publishing partner Gustavo Puerto Leisse.

Six years after she received a Golden Apple at the Biennial of Illustrations Bratislava, Spanish illustrator Elena Odriozola has been recently awarded the main prize at the 2021 competition for her illustrations in the book Mixed Feelings.

Odriozola, who was born in San Sebastian in 1967, first began to work in advertising before she embarked on her career as an illustrator of children’s books.

The Spanish illustrator’s works and the illustrations of other awarded artists from all over the world are exhibited until early January at Bratislava Castle.

The San Sebastian-based renowned illustrator spoke with The Slovak Spectator about her work, children’s books, and her experience with Bratislava.

What does winning the grand prix of the BIB mean to you?

I'm very excited about winning the prize. You never expect it to actually happen, so when they call you and say you’ve won it’s very exciting!

You had already been featured in the BIB and won the runner up prize, the Golden Apple. How did you like Bratislava?

I had the chance to visit Bratislava for a few days back when I won the Golden Apple. I remember dropping the Golden Apple into all the flowers I received. It's a very good memory, Slovakia is so different from Spain but very lovely.

Can you say more about the genesis of the winning book? The idea of philosophy for children is very ambitious and pertinent, was it a challenge to bring it to life?