Covered in fir bark, a chapel in central Slovakia is a rare thing 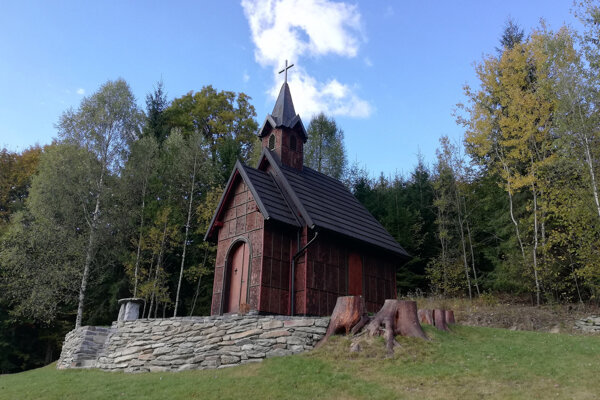 An old wooden chapel in the heart of Slovakia, several kilometres outside Hriňová, is an extraordinary sacral construction that many tourists have not discovered.

The building, located in the hamlet of Horná Bzová, which is part of the village of Podkriváň, Detva district, is lined with fir bark on the inside and outside, which makes it one of its kind in the country.

“The large slabs of fir bark are immensely impressive for their silver colour,” said Nikola Sibylová from the regional tourism organisation Turistický Novohrad a Podpoľanie, as quoted by the TASR newswire.

The colour especially stands out in the interior, she added, as it evokes the atmosphere of soft lightning. The chapel, which was built in 1910, is equipped with a small altar, a bell tower and two rows of benches.

Holy Mass once a year

The wooden construction stands on a small steep hill near a forester’s hut, and it was Count Štefan Ziči who decided to have it built here. He lived on his estate in the village of Divín, which can be found just a few hills away, but he often hunted in the woods between his home and Hriňová.

The remoteness of the area encouraged the count to build this nearly unknown chapel. Moreover, in winter, it was impossible for people and forest workers living in the remote areas of the region to descend into the villages and take part in church services. The count decided to help them.

The chapel is consecrated to the Assumption of the Virgin Mary. “Holy Mass is held here once a year,” Sibylová said.

The chapel underwent reconstruction in 2019, when the old dusty bark, among other things, was replaced with a new one on the outside. In addition, locals have long kept it in good condition by painting the chapel with coats of paint containing beeswax.

Holy Mass in the bark-covered chapel from September 2021:

Tourists can reach the small sacral building by following an asphalt road from Dolná Bzová, but they can set out on a trip to the chapel from Hriňová-Košútky as well.

A replica of the chapel also stands in the open-air museum in Vydrová near the popular central Slovak village of Čierny Balog.