The winning beech grows in front of the mountain rescue service in Starý Smokovec. 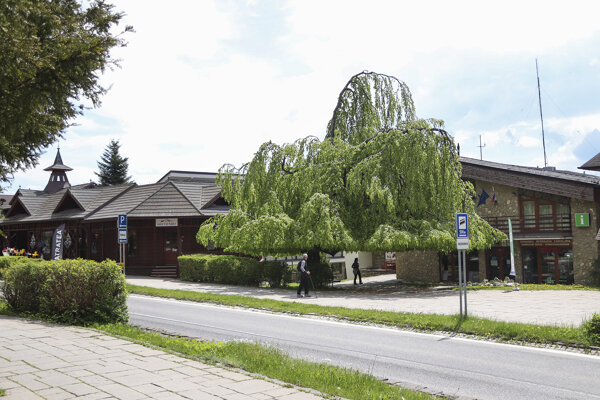 A 70-year-old common beech growing in Starý Smokovec, Poprad district, has been voted Slovakia’s most beautiful tree of 2021.

The winning, 13-metre-tall tree, which is dubbed the tree of people in love and the Tatras umbrella, will represent Slovakia in the European Tree of the Year contest next spring.

So far, no one has been able to find out who planted this beech and why.

“It probably happened in the 1950s thanks to students led by Bohdan Wagner from the Horticultural School in Lednice, Moravia, as part of the ‘Big Cleaning’ project,” said Martina Hromadová from the Ekopolis Foundation, which organises the Tree of the Year contest in Slovakia.

The tree is under the protection of Mountain Rescue Service members, whose headquarters stands next to the winning beech. They even saved the tree from being cut down.

Although the common beech is the most common tree in Europe, there are very few beech trees in the High Tatras.

The 15-metre-high common oak growing in Giraltovce, this year’s runner-up, used to be part of the large Bán Park adjacent to a manor house built by the Šemšei Family in the 17th century. While the manor house is used as a venue for various events, the park no longer exists – except for the old oak.

Today, the tree is surrounded by several churches. Locals say it is the oldest tree in the town.

The eleven-metre-tall catalpa growing in the Mariáss Garden in Hnúšťa is the most exotic tree of the twelve finalists in this year’s competition. This species was imported from North America to Europe in 1726.

Hromadová noted the Hnúšťa catalpa is probably the thickest and oldest southern catalpa in the country.