The quickest way to reach the path is from the Horáreň Krasňany area. 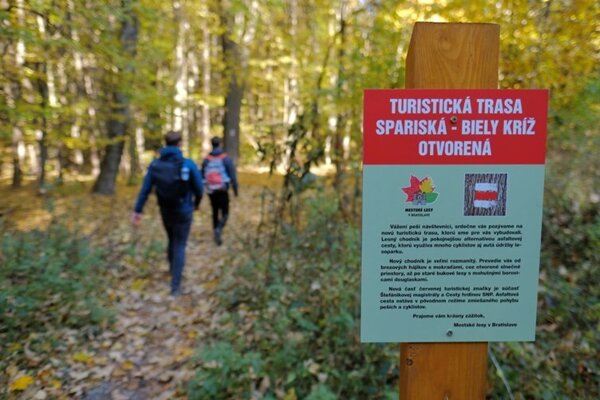 The new five-kilometre-long track is part of the SNP Heroes' Trail, which stretches from the Dukliansky priesmyk pass in the east of Slovakia to Devín Castle. (Source: Bratislava.sk)
Font size:A-|A+  Comments disabled

A new walking and running trail has been opened to the public between Spariská and Biely kríž, two hiking areas in Bratislava Forest Park (Bratislavský lesný park).

“The path is a better alternative to the original asphalt road. You can avoid cyclists,” said Matej Dobšovič, who is in charge of the organisation Urban Forests in Bratislava.

Hikers can walk the trail, situated in the hills above the capital, at a leisurely pace in about an hour. The fastest way to get to this track is from the Horáreň Krasňany recreational area, at the end of the Pekná cesta road in the Bratislava borough of Rača.

Before this trail was opened, hikers walked the asphalt road, which is also the most used cycling route in Forest Park. The busy road has often seen conflicts arise between cyclists and hikers.

The new trail, which was created with the help of a hundred volunteers, is therefore accessible only to hikers and runners, not to cyclists, but they can keep using the asphalt road as well.

Visitors can spot here a birch grove with wetlands, massive Douglas firs from North America and Lake Horseshoe with a 150-year-old beech growing next to it, Dobšovič noted.

The five-kilometre-long track, marked in red, is part of the SNP Heroes’ Trail, which stretches from the Dukliansky priesmyk pass in the east of Slovakia to Devín Castle.