Slovak vaccine scientist in USA: We were very lucky with the Covid vaccine

Viliam Pavliak works as a scientist for the Gates, developing vaccines against diseases in third-world countries. 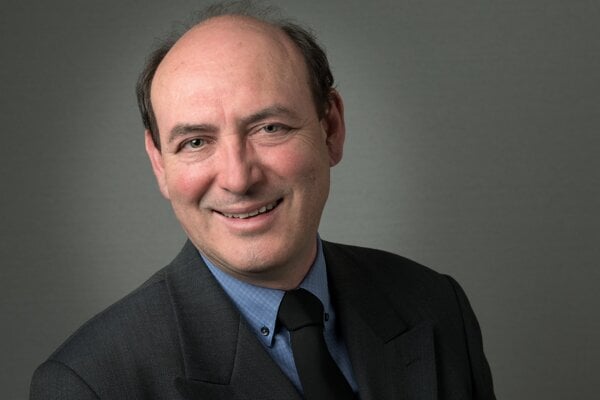 Viliam Pavliak has dedicated his entire life to vaccine research. He has worked in Canada, South Korea, and the USA, which he has called home for more than 30 years now.

"Slovak scientists have a great reputation abroad. To prove the point, there were four Slovaks working at Pfizer on the same floor at one time. This is pretty extraordinary, given the size of our country," says Pavliak, who works today at the Bill & Melinda Gates Medical Research Institute.

Together with wife Danka Pavliaková, who works at Pfizer development of methods used to test antibody responses to vaccines, they ensure their love for Slovakia is instilled in their two daughters, with plenty of Christmas wafers and honey cookies.

Fear of the vaccine

As a leader of vaccine research, he considers the fact that scientists correctly identified the spike protein on top of the corona virus as the target for vaccines to be very lucky. Based on that, they were able to create the vaccine against Covid.

"There is still no HIV vaccine, yet the virus has been around now for four decades," says Pavliak.

At the same time, he understands that people are worried about the new methodology of the mRNA vaccine, thinking that certain parts of the RNA or DNA of the virus are going to enter their body with the vaccine. He would like to put them at ease by explaining that those who catch Covid receive a much higher dosage of the mRNA than those who get the vaccine.

The uniqueness of mRNA allows for a faster adaptation of the vaccine to tackle new mutations, a task that takes considerably longer with the previous methodology. "All in all, we’ve gotten lucky twice," says Pavliak.

Chemistry at work as well as in marriage

He met his wife Danka at the Chemical Institute of the Slovak Academy of Sciences (SAV), where he was completing his PhD studies. During the 1989 Velvet Revolution, he was given the possibility to go to the USA for postdoctorate studies, so as a married couple they took the trip that changed their lives forever.

"The chemistry institute at SAV has a great reputation in the science world as many people that work there were trained at some of the best laboratories worldwide," says Pavliak. 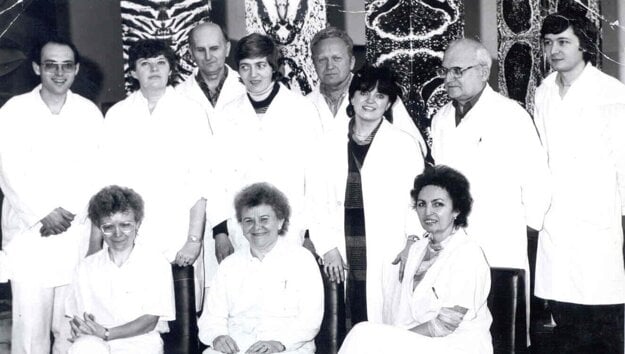 Viliam Pavliak (top left) with colleagues from the Chemistry Institute at the Slovak Academy of Sciences in 1987 (Source: Courtesy by V.P.)

Hi wife, a microbiologist, was immediately hired by a laboratory of John Robbins, a rock star among scientists. In Slovakia at that time the career options for two scientists were limited, so they decided to take the exciting work opportunities and stayed in USA.

For a number of years they worked together at Pfizer, although each at a different department. Pavliak was focused on vaccine research and the research of technology to develop vaccines. His wife still works at Pfizer, researching tests to measure antibodies in clinical studies. As well, she was part of the testing of the Covid-19 vaccine.

Vaccines against diseases we aren't even aware of

Today Pavliak works at a research institute of the Gates, where he’s responsible for the production of vaccines for clinical trial against diseases in third world countries, such as tuberculosis or a digestion disease caused by the bacteria Shigella. Such causes is where he finds the beauty of the idea of the institute; there are many organizations and companies researching vaccines, yet they often focus on the needs of the western world were the market is stronger.

Under his supervision, optimisation of vaccine production is being carried out. In these pandemic times, the major issues are very practical ones – to get materials for development as well as the ampoules. Deliveries are delayed due to Covid taking priority, as well as due to an overall smaller number of flights.

The research of the vaccine against tuberculosis is entering its third stage of clinical trials and will be tested on HIV positive people in South Africa. The vaccine against the digestion disease caused by the bacteria Shigella is just at the beginning of the research cycle. This disease is unknown to the western world. In developing countries it primarily kills newborns through unclean water, as the little bodies don't yet have the immune system to fight it.

"Slovak" life in the USA

When he arrived in Washington for the first time 30 years ago, he was in shock. He was expecting skyscrapers like the ones in pictures of New York, but Washington is a relatively flat city.

What impressed him immediately in the USA, though, was how well people from countries from around the world got along. "It wasn’t like I’m American and you’re Slovak," he remembers feeling 30 years ago, when they moved to their new home.

Connection with Slovakia is still alive in his American family. He still has a brother and mother in Slovakia as well as many friends from school. They travel often and gladly to Slovakia and enjoy the food, nature, and folklore but mostly the friendliness of the locals. "We listen to Slovak radio stations over the internet daily, so we hear all your local news as well as great music anytime."

Viliam and Danka Pavliak have two daughters. They were always the Slovak girls at school. Whenever there was hockey game, they would organize parties at their dormitory to cheer for the Slovak team. The elder one, Barbara, was born in Slovakia; the younger one, Kristína, although born in USA, picked Slovak studies in Pittsburgh as her second major. She speaks Slovak fluently and even gained a scholarship to summer university in Slovakia.

Their son-in-law is American, but he loves Slovak food, fairy tales and is starting to catch his first Slovak words. 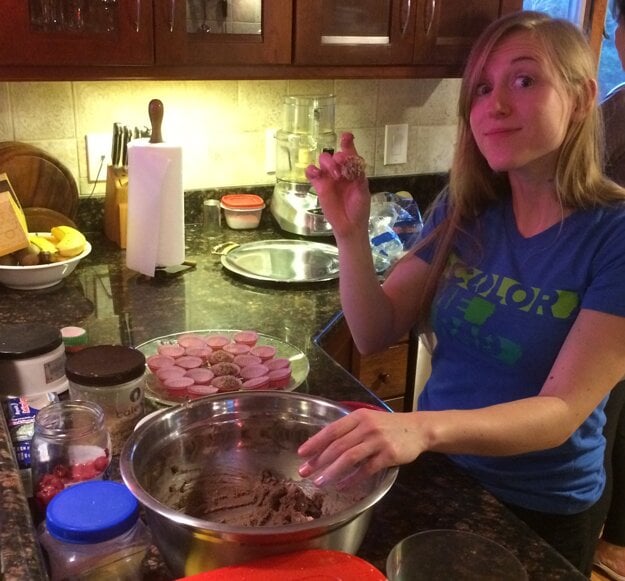 "We celebrate Thanksgiving; we like this holiday as it belongs to everyone. There are people from every cultural or religious background here, and this holiday is about being thankful and about food."

Yet nothing beats a classic Slovak Christmas. Their daughters learned how to decorate typical Christmas honey cookies, they serve fish – which is not typical for the US – and mostly spend Christmas in Slovakia with family, except for last year, when travel was nearly impossible.

"My brother-in-law in Boston even bought a wafer maker, and he provides all of his friends with them, as well as us. Otherwise, these are hard to come by here."

This Christmas they plan on spending the holiday at "home" in Slovakia with the entire family. They are thinking about returning to Slovakia permanently for retirement.

"Life is short, so I’d rather stay where conditions are better and work is exciting," says Pavliak, explaining why they plan to stay in the US for now.

How to improve Slovakia

Pavliak would love to help Slovakia. In scientific collaboration, the grant system in China, through which universities can invite experts for specific projects among Chinese expats from around the world, could be inspiring for Slovakia. According to Pavliak, something similar could work in Slovakia, so that experienced scientists as well small companies could leverage grant connections to help Slovak science.

"Even though I can’t help with everything, and the majority of information I handle is confidential, I’m open to bringing my experience to Slovakia," says Pavliak. The Slovak community, which is strong in the USA, could become a great source of necessary contacts.

"Our Czecho-Slovak community is very strong. We help each other, visit each other, just like recently at our Slovak friend’s garden goulash party. It works equally well in Washington as well as in New York," says Pavliak.

Mistrust in vaccination pains him

During a debate about vaccination, Pavliak remembers how respected Czechoslovakia was in the past for its excellent outcomes with the vaccination against polio, partially thanks to the fact that the regime at times ordered vaccination without debate.

"Today we have freedom and democracy, people want to make their own decisions about themselves. The only caveat is that this debate may be won by an aggressive virus mutation," he adds.

Pavliak predicts that the world should get ready for a future with Covid. For various mutations we will probably need to continue to be vaccinated yearly, just as we do with the flu, he says.

The level of mistrust against vaccines in Slovakia makes him as a scientist very sad. He recommends people listen more to experts, who have better access to information and whose outputs are peer-reviewed by other experts. Scientists spend a tremendous amount of energy to correct false information and hoaxes. As well, the vaccine is a preventive measure, so people can’t see its impact as well as they do with antibiotics, for example. He worries that those who may want to wait until a sufficient amount of people are vaccinated, to be sure that the longer-term side effects are minimal, are playing Russian roulette and may not live long enough to reach that moment of certainty.

"Hopefully, people will change their minds and get vaccinated. I am looking forward to Christmas in Slovakia."

This article was published with the support of a grant from the Ministry of Foreign Affairs of the Slovak Republic.