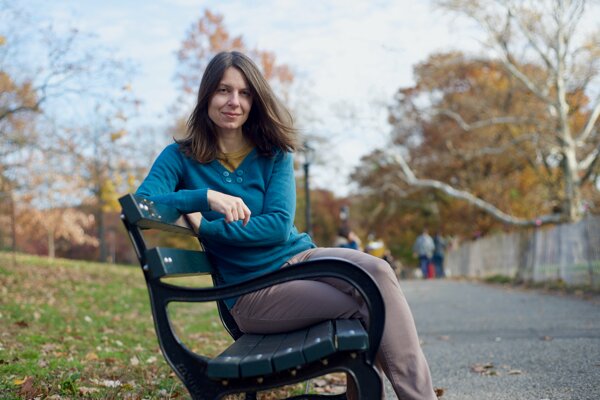 When New York became an epicentre of the pandemic in its beginnings, Google employees in the city had to leave the legendary creative offices and work from home. For Miroslava Sotáková, a mother of three young kids, it was a necessity as well as a benefit.

"We do not have a slide in our New York office, but we do have a fire ladder. It's not something people would use a lot, though," said Sotáková. It would be hard to find the work environment she describes in Slovakia: table tennis, videogames, chess and card games that employees come to play even outside their working hours. "I appreciate my awesome colleagues the most. And our terrace with a view. It's beautiful to be on the 15th floor in Manhattan in the middle of a garden."

However, those perks are not the main reason working in Google is still attractive for her.

Efforts rather than luck

Three young kids run around behind her back during our video call. With her Czech-born husband, the two have created a home for their family in New York, after they decided to move abroad 12 years ago. Her older kids are ten and six now, the youngest daughter is two.

Sotáková works as a developer of Google Cloud software, specifically in the computer safety area. She joined the company out of curiosity - she wanted to experience Google first hand. Before that, she worked for the EdTech startup and in the financial sector.

"Parenting is definitely easier in the US if one has a well-paid job. At least that allows us to pay for kindergarten. In New York, there are no state playschools for children under four," she explained.

After their arrival to New York, Sotáková sailed through several companies. The investment bank Golden Sachs was her first job in the city. She found a job at the risk modelling department.

"I do not believe in people having good luck, it's all about effort."

Today, she remembers her time in Wall Street as a busy time with a quick work pace, overtime work, and weekend work. "The culture there is just as one would expect in finance."

She quit at Goldman Sachs shortly after the economic crisis hit. "I had just returned from maternity leave with my first child. After two negative quarters they told me I no longer needed to come to work. I have no regrets that my financial career ended this way."

A mathematician by profession, she tried to get back to math but she quickly realised that programmers were much more in demand. For a few years, she worked as a developer in an educational technology startup. When a manager from Google that she knew wrote that he had vacancies, she decided to go for it.

"I think I had no expectations to work on anything innovative then, since Google is a large company that employs a hundred thousand people. Some products have been a standard for over a decade."

After her mathematics studies at the Charles University in Prague and a PhD in Denmark she did not want to stay in academia. "It is a paradox that during the financial crisis it was easier to get the work visa to the US, even though the labour market in Europe was still stagnating. The US have strict quota on the number of immigrants that is quickly exhausted, but during the crisis, people with the highest education or very experienced people were in demand. Moreover, both me and my husband had many friends in New York."

Her husband, also a mathematician, quickly progressed in the financial sector.

When the pandemic hit and New York became its epicentre, and along with it unexpected travel restrictions, the situation accelerated the decision to leave for many people who have always thought they were going to return to Europe one day.

Sotáková and her husband visit Slovakia and Czechia every year in the summer and at Christmas. They also think they will return permanently one day. "It's hard to gain new good friends once you have a family. I still maintain most contacts with people I have known for decades."

Strong relationships stay strong despite the distance; that has been Sotáková's experience in her relationships with people back in Slovakia.

Slovaks living abroad also consider their children's Slovak language skills when thinking of moving back to Slovakia. "Our children speak Slovak and Czech fluently. It helps a lot that we can afford to spend six weeks in Slovakia and Czechia every year."

Far from the big city crowd

Sotáková spent the first 18 years of her life in Slovakia. She later studied in Prague, in Denmark, and then went on to work in Canada and in the US.

She still appreciates the things about Slovakia that people back home might not even realise. As a native of the northern-Slovak region of Spiš, she brings her family to the Slovak Paradise, the Tatras and Slovenské Rudohorie. The Tatras, even though considered crowded by the locals, is still a big contrast to New York, where one needs to travel a couple of hours to reach the nearest nature. On a nice day, half of the city is on an outing and the trip takes twice as long due to traffic jams.

"The great thing about Slovakia is that I can enjoy some things on my own, without the crowds. I decide I'm going somewhere - and no planning weeks in advance is needed to make sure that a concert isn't sold out."

In the US, she also feels the social tension since the death of George Floyd. Racial injustice dominates the public debate even when issues not directly linked to it are debated. The omnipresence of the topic makes Sotáková feel like it polarises society even more. "I am aware, especially coming from Spiš, that there are problems faced by disadvantaged groups, but it is not the core of every discussion."

Sotáková and her husband see their future in Prague rather than in Slovakia. Life in New York is expensive, so every job decision is based on the wage. "If I returned [to Europe], I wouldn't look primarily at the money, I would look at some mission close to me."