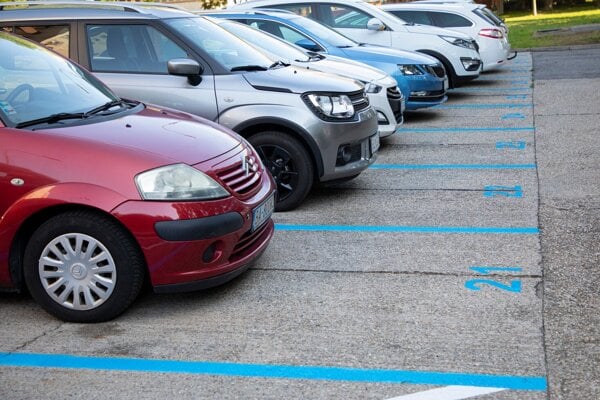 Bratislava has launched registration in the regulated parking system for the first locations where the city-wide parking policy will be introduced at the beginning of next year. The aim of the Bratislava Parking Assistant (PAAS), which is the official name of the scheme, is to set clear rules for parking and improve the parking possibilities for residents.

The city-wide parking policy will be launched on January 10, 2022, in the following zones: Krasňany in Rača, Tehelné Pole in Nové Mesto and Dvory 4 in Petržalka. Until this date, there is unregulated parking in Krasňany and special rules apply in Tehelné pole and Dvory 4. 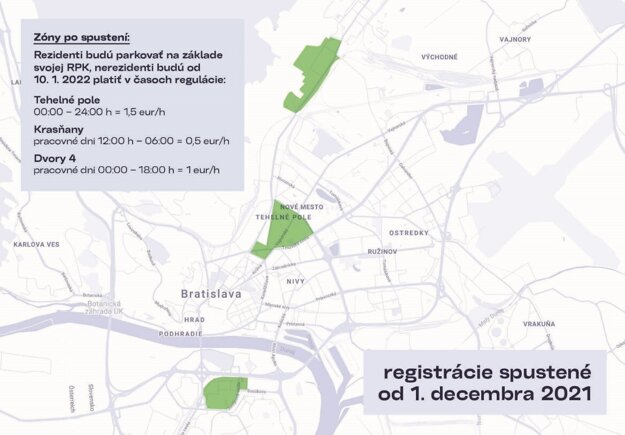 Residents of these zones can register and purchase resident parking cards on the website www.paas.sk.

Residential card: Every resident will be able to buy an annual resident card for a specific car with which he/she will park indefinitely at his/her place of residence. A maximum of three resident cards can be issued per apartment. The price for the first car is €39, for the second €150 and for the third €500.

Bonus card: Residents can also buy a bonus card, which will give them two hours a day to park in another regulated zone, with the exception of the zone with the highest tariff A (Old Town), which is charged for all. Its price is €10 euros per year

Subscriber (Abonentská) card: Intended for people who do business, own real estate or run a shop or another business unit in the zone for which the parking card is issued. Tariff zones range from €2000 to €500 per year.

“The registration will not be affected in any way by the current lockdown, as the system does not normally require a personal visit to offices, proof of ID and various documents,” said Katarína Rajčanová, spokesperson of Bratislava, as cited in the press release. “As the first information system in Slovakia, it integrates and uses five state registers.”

Residents of these first three zones will be able to park indefinitely at their place of residence after registering and purchasing a resident parking card at no additional charge. Visitors to the regulated zone, on the other hand, will pay an hourly rate for parking at the set time after January 10. The residence card for one car will cost €39 per year. Households with more cars will pay €150 for the second car and €500 for the third.

“Residents of the first zones will also have an advantage; their resident cards for the first car purchased before April 30, 2022, will be valid for 15 months for the price of an annual resident card,” said Rajčanová, adding that the residents could also request a free visitor’s card, which will give them free parking hours for their visits.

All residents of Bratislava with a permanent residence anywhere in the capital can also register and buy a so-called bonus parking card for €10. It will enable them to park for two hours a day in any regulated zone at no additional charge. 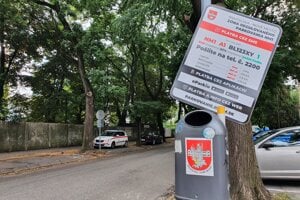 In the Dvory 4 zone in Petržalka, until the launch of the PAAS, the rules set by the Petržalka borough will apply. As of January 10, only residents with a PAAS resident card will be able to park in the marked places. Non-residents will pay €1 per hour of parking during workdays between 0:00 and 18:00.

“Although the Petržalka borough is still designed as one zone and all residents of Petržalka can buy a PAAS resident parking card, this option will only pay off for those who live or often park in Dvory 4,” Rajčanová wrote, adding that residents could park for free in blue car parking places on the basis of a city district resident card.

“As most of the Nové Mesto borough is currently approved as one zone, other residents of Nové Mesto will also be able to buy a resident card; however, this option will only pay off for those who live or often park in Tehelné pole,” Rajčanová wrote.

In the Krasňany zone in Rača, residents will park from January 10 on the basis of a PAAS resident parking card. Other residents of the city district and the city will be able to use the bonus card for two hours a day. Non-residents will pay €0.5 per hour of parking during workdays between 12:00 until 6:00.

“This time is set to discourage commuters from nearby towns and villages from parking their car in Krasňany for the whole day and switching to the tram,” Rajčanová wrote.