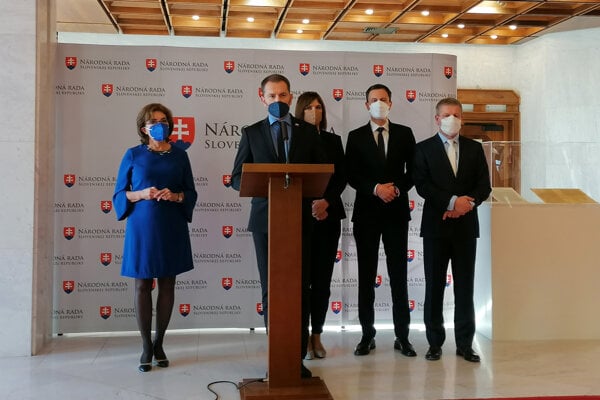 The Slovak government will prolong the curfew-based lockdown, originally scheduled to last until December 9 and containing many exceptions. The coalition partners have reached an agreement on further measures, PM Eduard Heger announced on Tuesday.

After two weeks of discussions about schools, the government decided grades five to nine of primary schools and all of secondary schools should go online as of December 13. This is a change for just about half of Slovakia, since in 35 out of Slovakia's 79 districts, schools have been closed as of December 6.

All kids from fifth grade and up will study online for five days before Christmas holidays start on December 20.

Anna Zemanová, head of the Freedom and Solidarity (SaS) caucus in parliament, said that it was one of the compromises they made for the sake of open shops and service providers. Until now, Education Minister Branislav Gröhling of SaS had insisted on keeping schools open.

As of December 10, all shops can open for vaccinated and recovered people (known as the OP regime in Slovak). They will remain open even after December 25, though the original proposal of the health minister was to open them for only one week before Christmas.

Services (like hairdressers, beauty parlors, etc) should be able to open on December 17 and hotels on December 25, still just for vaccinated and recovered (OP regime) people, pending the government's approval on December 8. Negative test result will probably be required for hotels and other accommodation facilities in addition to the green pass.

Churches will be allowed to hold services as of Friday, December 10, but limited to the vaccinated and recovered, and for no more than 30 people or one person per 25 square metres.

These measures are scheduled to last until January 9, 2022.

However, Health Minister Vladimír Lengvarský will receive what Finance Minister Igor Matovič called a "handbrake": on Wednesday, December 8, the government will announce the critical number of Covid patients in hospitals. As soon as the number is exceeded, the health minister will be able to immediately revert the measures and scrap the easing announced now.

Earlier in autumn, the ministry set the critical limit for the number of Covid patients in hospitals at 3,200. This was exceeded in the second half of November. As of December 6, there were 3,500 patients hospitalised with Covid in Slovakia.