Matovič's state budget has been passed. Which ministries will receive the most and what could go wrong?

The health care budget has been criticised the most. 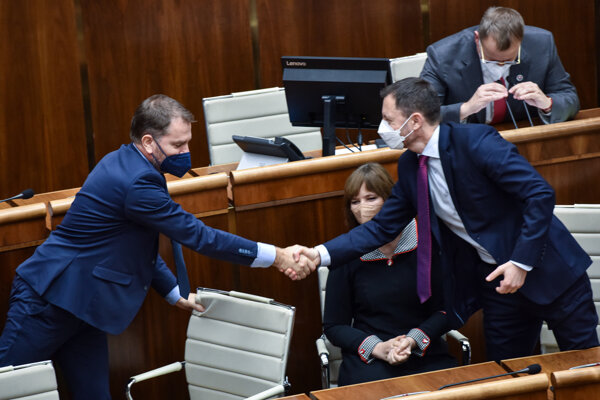 The parliament has passed the first state budget of Finance Minister Igor Matovič (OĽaNO) with 91 votes of the 146 MPs present in the house during the December 14 vote.

The budget includes €500 million that the finance minister plans to distribute only after the coalition agrees on securing the sustainability of public finances. The agreement should have been on the table by year's end, but it has yet to be concluded.

What happens if the government fails to make this agreement at the beginning of 2022? Does the state budget count on higher salaries for teachers and health professionals? The Index magazine has answered the main questions on the general government budget for 2022-2024.

What do the revenues and expenditures of the state budget for 2022 look like?

Next year's budget is counting with revenues amounting to nearly €20 billion. Most of it should come from taxes (€14.3 billion).

The expenditures shouldn't exceed €25.4 billion, which is slightly less than this year, when the government needed to amend the state budget to increase the pandemic reserve.

Which departments will receive the most money and for what purposes?

The biggest sums will go to the health, labour and education departments.

Health Ministry will have €6.3 billion to spend, a year-on-year increase by €411 million. This represents the biggest item in public finances after pensions. The health department needs more money for additional payments for selected population groups and for innovative treatment, as well as for the health procedures that could not be performed this year due to the pandemic.

At the same time, the health care budget has also been the most criticised, by the doctors' unions as well as the Supreme Audit Office (NKÚ).

The Labour Ministry will dispose of €3 billion, an increase by €171 million year-on-year, which includes the increased spending on severely disabled people, higher contributions for care and higher parental allowance and child allowance.

More than €3 million will go to the Education Ministry, €459 million more than this year. The increased sum is allocated for kindergartens, schools and teachers' assistants.

What is the criticism on expenditures for health care?