Ryan Martin Bradshaw has performed with several orchestras in Europe, despite his young age. 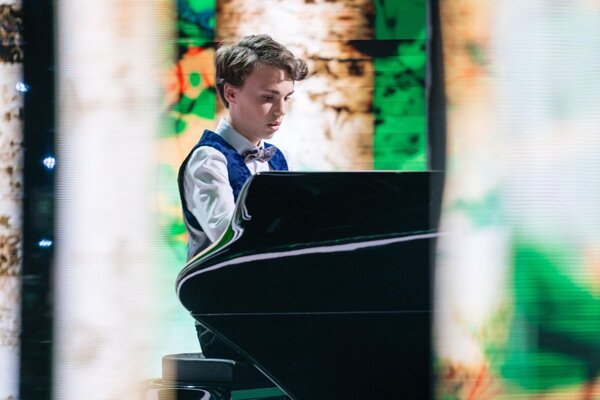 Ryan Martin Bradshaw, who played Tchaikovsky on the black piano in the middle of a stage with the orchestra sitting around him, left the jury, including opera singer Plácido Domingo, in awe.

“Ryan and the piano are like one body,” Polish mezzosopran Alicja Węgorzewska, a jury member on the Virtuosos V4+ classical music talent television show, said after watching a seven-minute-long performance by the 14-year-old Australian-Slovak pianist. Węgorzewska was on the verge of tears.

During the December final, in which ten young artists from the Czech Republic, Slovakia, Poland, Hungary and Croatia competed, Bradshaw became one of five winners. The rules say that a winner has to be selected from every participating country.

The gifted piano virtuoso, who started playing the piano at the age of six, chose to perform an excerpt from Pyotr Ilyich Tchaikovsky’s Piano Concerto in B flat minor, movement III, for his final performance.

Slovak pianist Peter Valentovič, another judge on the show, said that Bradshaw was one of the greatest talents he had ever seen. “You see such talent every 50 or 100 years,” he claimed.

Last February, it was announced that the student at the University of Music and Performing Arts in Vienna, who had played with orchestras and participated in numerous contests around Europe, was going to join the Slovak Radio Symphony Orchestra.

Hauser, the award-winning Croatian cellist on the jury panel, looked at Bradshaw in astonishment after his performance.

“It is incredible that someone can be such an accomplished pianist at the age of 14.”