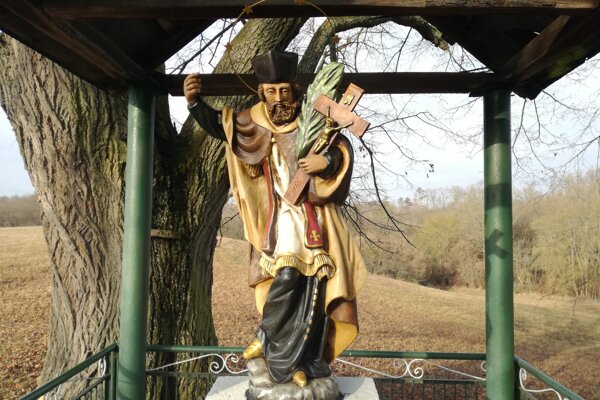 The almost 200-year-old statue of St Ján Nepomucký, which was stolen 30 years ago by an unknown perpetrator from a pedestal near the old linden trees at the end of Horný Badín in the Krupina district, was replaced with a replica at the end of 2021. (Source: Jozef Poliak for TASR)
Font size:A-|A+  Comments disabled

We are writing about Hriňová's outdoor pool, postcards that will be sent to space, and a Slovak sculptor who left for America and never came back. 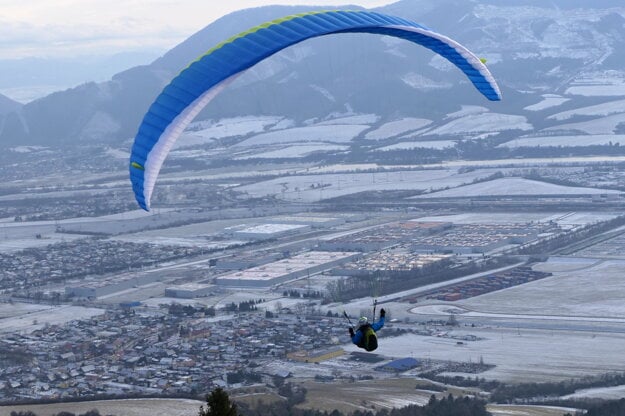 A paraglider on the Stránik hill, located six kilometres off Žilina, on January 12, 2022. (Source: Erika Ďurčová for TASR)

Swimming pools in Slovakia remain closed, but an outdoor pool in Hriňová, central Slovakia, is open even during the cold winter months, welcoming visitors twice a week.

“The previous ice swims took place in a pleasant atmosphere, attended by people of all ages,” Lukáš Horník, the head of sports facilities department at Hriňová Town Hall, told the TASR newswire.

Around 20 people regularly come to swim in the pool. The water temperature varies between 1°C to 4°C, depending on the weather. Some Slovaks prefer wild-water swimming in nature in the winter, however. 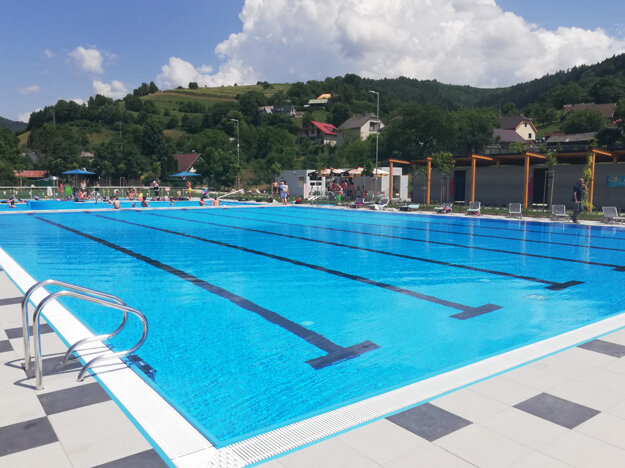 An outdoor swimming pool in Hriňová, near Detva, was reopened in 2021 after more than two decades. (Source: Silvia Tannhauserová for TASR)

The reconstructed outdoor pools in Hriňová reopened for the first time after 22 years last summer. People can use the swimming pool and pools for children and relaxation.

“Outdoor changing rooms are at people’s disposal, as well as hot tea to help warm the body,” Horník concluded.

Slovak who left for Hollywood

For Jewish sculptor Dezider Ignác Lányi, a native of Bánovce nad Bebravou, Europe became too small at a later stage in his life. So he decided to move to America’s west coast.

“Lányi was a versatile sculptor who created a variety of works – from small animal sculptures, through tombstones and monuments, to portraits of prominent personalities,” said museum specialist Diana Kmeťová Miškovičová from the Slovak National Museum-Bojnice Museum. Among his creations were animal sculptures for the Lipótváros casino, now the cultural centre Donaupalast, in Budapest, and a bust of Edward, the Duke of Windsor. 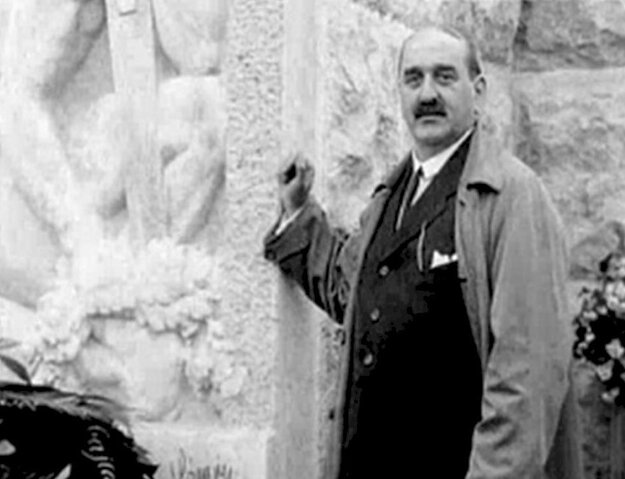 Born on January 23, 1879, the award-winning artist studied and exhibited all over Europe, including Budapest and Vienna, before relocating overseas. He moved to Los Angeles, and later to Hollywood, in 1936, where he passed away in 1951.

“During his American life, he created acclaimed naturalistic-expressive caricatures and portrait sculptures of authors, actors and members of the film industry,” the expert added. Art venues such as the California Art Club and Friday Morning Club liked them so much that they decided to support the sculptor and put his work on display.

People in Slovakia have a chance to send their postcards out into the universe for the first time, the Slovak Space Office and the Space Generation Advisory Council said.

The Postcards to Space project is organised by Club for the Future, a US foundation established by Jeff Bezos’ Blue Origin. It aims to inspire young people to pursue careers in STEM. 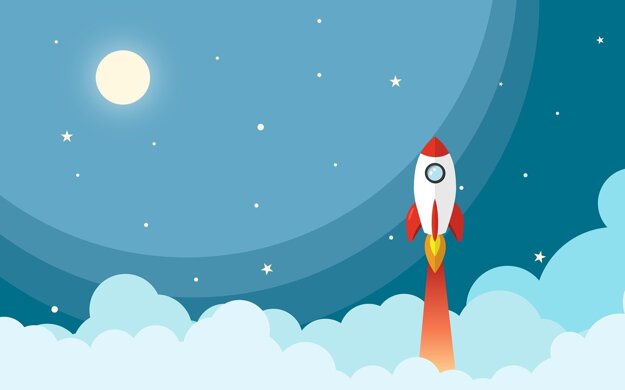 The Postcards to Space project is organised by Club for the Future, a US foundation established by Jeff Bezos' Blue Origin. (Source: Pixabay)

“Write or draw your vision on a postcard for what you think the future of life in space will look like—or any other message you would like to send to space,” Club for the Future writes on its website. The foundation also poses a question: Why do you think Earth needs space?

Slovak organisations will then post them to America. All postcards will be placed in the New Shepard, Blue Origin’s rocket, that will launch into space from a desert in West Texas. A capsule with postcards will return to Earth after floating in space, 100 kilometres above the planet, and be sent back to people with the “Flown to Space” stamp.

The Koch Garden, the only one of its kind in Slovakia, has been inaccessible and has lacked proper maintenance for years. Now, it is headed towards a better future. 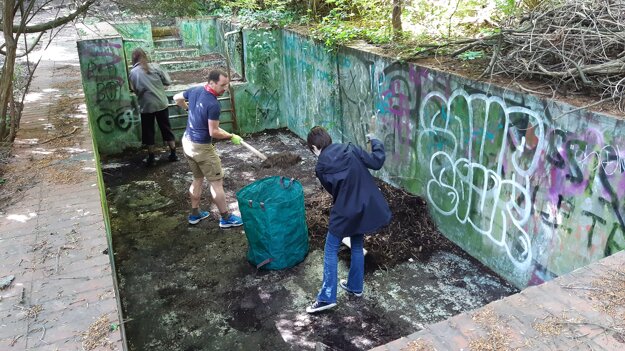 Volunteers clean up the neglected Koch Garden in Bratislava. (Source: Courtesy of the National Trust)

In late December, the Bratislava city council approved a land swap with the Interior Ministry, which owns the garden at the Koch Sanatorium in the Old Town. The city plans to revitalise the garden and make it accessible again. At the moment, the garden is opened sporadically.

The organisation, which began organising volunteering maintenance work in the garden in 2008, hopes that the swap will grant the Koch Garden what it has been missing for years – a responsible and caring owner.

Christmas: Bratislava has set up more than 500 spots around the city where people can leave their Christmas trees until February 11. A map is available here.

Tatras are treacherous in the winter

Slovak mountain rescuers spent most of the past weekend searching for three missing Poles under the Kotlový Štít peak. Unfortunately, all three were found dead.

In an interview, the chief of the Mountain Rescue Service, Miroslav Živčák, talks about the rescue intervention concerning the Polish hikers. 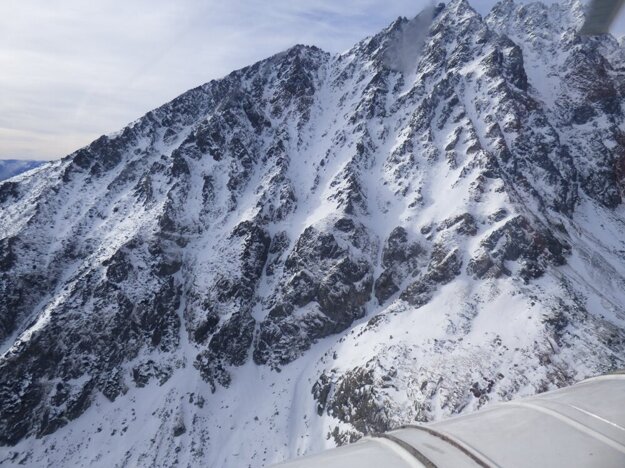 A shot from the past weekend's search for Polish tourists. (Source: Facebook/Mountain Rescue Service)

He goes on to warn people that it is necessary, even on marked hiking trails such as the one leading to the Zamkovského Chata mountain hut, to have the proper equipment and go hiking with walking sticks and crampons.

That is for now. Have a lovely weekend! - Peter