He has been taken into custody. The next trial will be held on January 26. 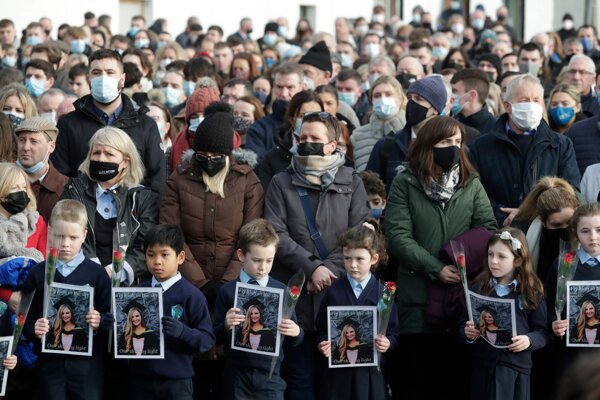 School children who were taught by Ashling Murphy hold pictures of their teacher outside St Brigid's Church, Mountbolus, Ireland, at the end of her funeral on Tuesday, January 18, 2022. Hundreds of mourners in Ireland attended the funeral mass of the 23-year-old schoolteacher whose murder has reignited the debate on how to tackle violence against women. (Source: AP/TASR)
Font size:A-|A+  Comments disabled

Irish authorities have charged a 31-year-old Slovak with the murder of teacher Ashling Murphy.

The man, identified as Jozef Puška, lives in the town of Tullamore in Ireland. He stood trial on January 19 after he was charged, the TASR newswire reported.

23-year-old Murphy was attacked while exercising beside a canal in Tullamore on January 12.

In court, a detective sergeant gave evidence of the arrest and charge. The judge ordered Puška be taken into custody to appear again at Clover Hill District Court on January 26, the British broadcaster BBC reported.

Puška’s defence solicitor applied for free legal aid and for the services of an interpreter, stating that the man is a Slovak national who has been living on €200 a week, as reported by BBC.

Even though the police detained another man during the investigation, he was later released, without any charges being brought against him, TASR wrote.

The Slovak Foreign Affairs Ministry said it is monitoring the investigation of the case along with the Slovak representation office in Dublin. Yet, the ministry’s spokesperson Juraj Tomaga refused to comment on the matter on January 19.

At the time, it was still unofficial information and no charges had been pressed. The information that the suspect was a Slovak national was only reported on by the Irish and British media.

Tomaga said that in similar cases if charges are pressed and the suspect asks for consular assistance, the ministry tries to assist them within the bounds of possibility, the SITA newswire reported.

The Prosecutor's Office was contacted by Irish authorities through the European Criminal Records Information System (ECRIS), the TASR newswire said.

"The Prosecutor General's Office of the Slovak Republic immediately provided the Central Authority for the Exchange of Information from the Criminal Records of the Republic of Ireland with all relevant information in accordance with the Criminal Records Act and the European Convention on Mutual Assistance in Criminal Matters," the spokesperson said.

Slovak police also said their Irish counterparts had been in touch with them over the case, according to a report on TV Markíza.