The world belongs to all of us, Košice Roma children sing

The choir Ďevjatkakere Čhave has put out its first music video. 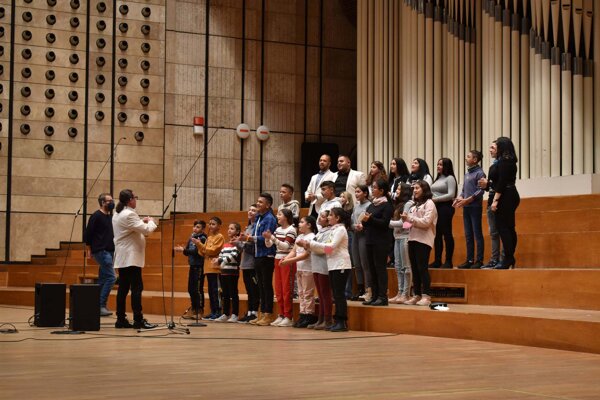 In their very first music video, Roma children let people know they love the world, and that it belongs to everyone regardless of their family background.

For the Slovak-Roma song Milujeme svet (We Love the World) about 40 children travelled to the High Tatras for the first time in late 2021 to shoot the video in cooperation with the private television channel Joj and with the support of an anonymous donor.

“This gave them the feeling that they meant something, and they were able to achieve something,” Ľudmila Podjavorinská Primary School Košice Principal Iveta Rošková told Joj.

The production is set in the beautiful scenery near the popular mountain lake Skalnaté pleso. Some scenes were also filmed in Luník IX, where these children come from.

Sang for the pope

Growing up in this notorious Košice neighbourhood, one of the most neglected parts of Slovakia, young talent have found refuge in music and their local primary school choir Ďevjatkakere Čhave.

Formed in 2019, the ensemble at Ľudmila Podjavorinská Primary School is led by choirmaster Ondrej Ferko.

We Love the World

We love the world and we can prove everyone that the world belongs to us all.

Your quarrels and afflictions hurt us, dear adults.

We wish to live forever in peace with you.

We ask you all to give yourself a break.

After all, the world is big and everyone has a place in it.

So let’s be kind to one other.

Though it is a young choir, children were invited to perform for Pope Francis during his visit to Košice and even appeared on Czechoslovakia’s Got Talent last September.

Not only Roma children from the school filmed a music video, though.

Their teachers haven't fallen behind.

In December 2021, they released the song Vždy si vieme cestu k sebe nájsť (We Can Always Find Our Way to Each Other) in which they sing about the relationship between teachers and students impacted by the pandemic.

“The song symbolises that even in difficult situations we can support each other and hold on,” school principal Iveta Rošková said.