Reversal of fortune: Robert Fico is on course to lead the most popular party again

Smer is only as strong as its opponents are weak, notes political analyst. 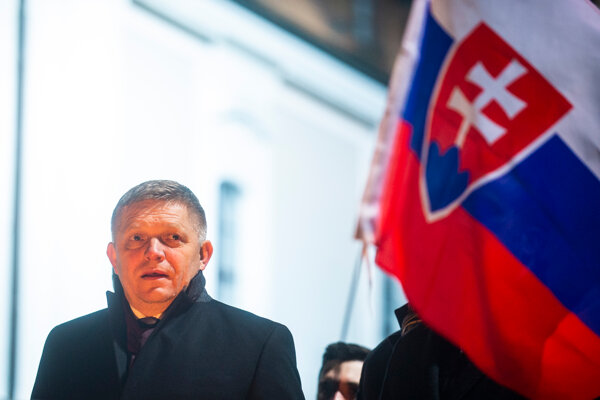 A recent, mid-winter protest organised by the opposition party Smer attracted about a thousand supporters to a square in front of the presidential palace in central Bratislava. It was a potent demonstration of the party’s revived fortunes.

“Slovakia must be ready for an uprising by the people against the government,” declared Smer leader and three-time former prime minister Robert Fico, as quoted by the TASR newswire.

While representatives of other opposition parties also showed up at the protest, among them Hlas and the extra-parliamentary Slovak National Party (SNS), a recent public opinion poll suggests that Smer is the one rising fastest in popularity.

Smer is now only 1.5 percentage points behind the strongest party, Hlas, which was formed by Peter Pellegrini in summer 2020 after he and others broke away from Smer. The split began a decline in support for Smer, which eventually bottomed out in opinion polls at around 9 percent between November 2020 and February 2021.

Since then, however, the party has steadily regained popularity and observers point out that Smer is now close to reclaiming the number one spot in the polls. Robert Fico, who frequently dabbles in rhetoric that is hard to distinguish from the vocabulary of extremists, has been successful at setting the political agenda. He is regarded by opponents and supporters alike as a significant figure, and one who is omnipresent across the political scene.