Global warming is being blamed for the growing number of wild pigs. 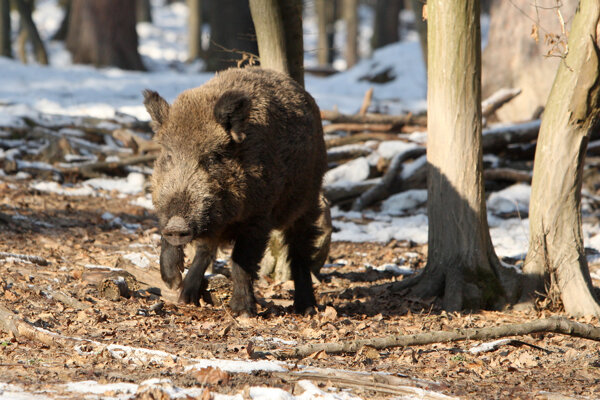 While recent videos of wild boars wandering the streets of Bratislava have gone viral, the borough of Karlova Ves, supported by others districts, is not amused – and has turned to the state to solve the problem.

“Given the emergency situation, Karlova Ves has prepared an official request for an urgent solution, which it is sending to the environment minister and the agriculture minister,” said Branislav Heldes, spokesperson of Karlova Ves, as quoted by the TASR newswire. “It is essential that state institutions finally begin to pay proper attention to this phenomenon.”

Karlova Ves borders the forests of the Small Carpathians on its western side, so wild boars are quite often seen wandering its streets. Night-shift employees at the borough office in Karlova Ves recently spotted a herd of 50 boars in the very heart of the borough. And earlier this week a wild boar was filmed running past the new building of the Slovak National Theatre, in the centre of the city.

Dana Čahojová, the mayor of Karlova Ves, raised the topic of wild boars at a meeting of Bratislava City Council on Thursday, February 10, where she received support from representatives of the city and other Bratislava boroughs. She noted that the borough does not have the legal authority or means to cull wild boars on its territory. However, it regularly applies to the district office for special hunting permits for state or city forest hunters.

“The hunters’ interventions so far are clearly insufficient,” said Heldes.

Karlova Ves sees two main reasons behind wild boars' appearance in its streets: their overpopulation, and the increased movement of people in suburban forests.

The chairman of the Devínska Kobyla hunting association, Ján Martinovič, believes that the increased number of wild boars in and around the capital is a sign of global warming.

“While many years ago the female had a maximum of five offspring a year, because the living conditions were more demanding in the past, today, she litters five cubs in the spring and in the autumn,” said Martinovič, adding that wild boars are no longer affected by severe winters or food shortages.

The municipal forest company Mestské Lesy v Bratislave (MLBA) attributes the significantly higher number of wild boars to the availability of food and the absence of a natural predator, such wolves.

A few days ago, the Environment Ministry pointed out that the proliferation of wild boars in the capital is a long-term problem, but said it does not have the power to solve it. The ministry said that it has allowed hunting of hoofed game in natural reserves in Bratislava to avoid such situations, but noted that matters related to hunting fall under the Agriculture Ministry.