Having extremist parties as coalition partners is not supported by voters of the current coalition. 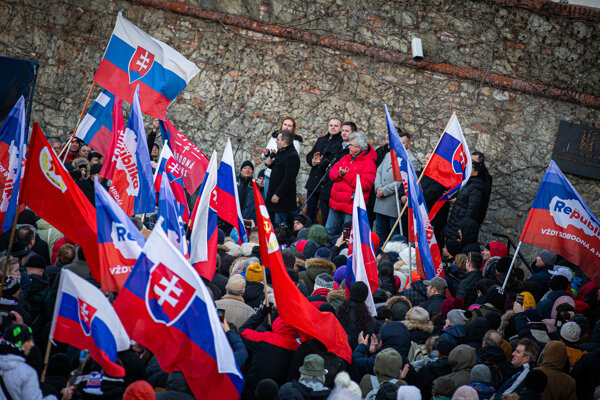 Protest of Republika against the defence agreement with the US (Source: Sme)
Font size:A-|A+  Comments disabled

Robert Fico has said repeatedly that his party Smer is anti-fascist. At the same time, he has stated publicly that after the next election, Smer may cooperate with the Republika party, which was established by former members of the extremist People’s Party Our Slovakia (ĽSNS) of Marian Kotleba.

“I have no problem communicating with other parties like the Slovak National Party and Republika. But they have to cross the threshold of 5 percent,” said Fico a month ago on ZVTV television, part of the disinformation outlet Zem a Vek. He added that the base of future government should be created by Smer and Hlas.

One of the major representatives of Republika, Milan Mazurek, wrote on Facebook in 2016 before he was an MP that “only lies are being taught about Hitler” and that “six million victims and soaps from Jews are lies and fairytales.”

Republika, a party that was established after the fracturing of ĽSNS, avoids these topics. But Mazurek was also sentenced as an MP for racist anti-Roma statements on Žilina's commercial radio station Frontinus.

Ondrej Ďurica, another member of the party, was a singer for the band Biely Odpor (White Resistance) connected with neo-Nazism. The courts decided in 2018 that based on the lyrics of his songs, journalists can refer to him as a neo-Nazi.

The Focus agency's February poll for the Na Telo political discussion programme on television Markíza showed that while for 75 percent of Smer voters, it would be unacceptable if the future ruling coalition after the next election relied on the support of Marian Kotleba's ĽSNS, the Republika party is more acceptable for them.

In fact, 43 percent of voters of the Smer party supported the future coalition's potential cooperation with Republika. However, a majority of Smer voters — 52 percent — do not support the idea.