The Slovak translator persecuted for her father’s anti-communist beliefs explains the difference between Chinese and Western ‘truth’. 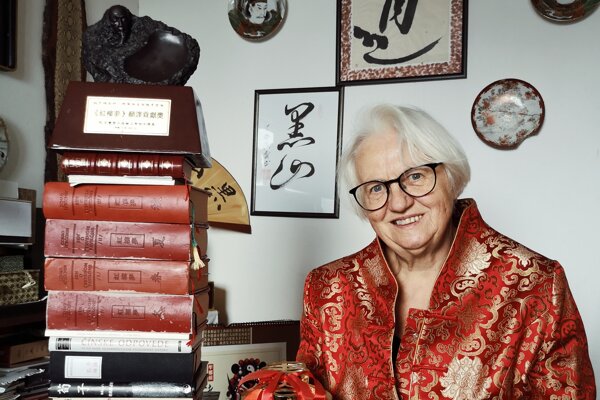 More than six decades later, she says is grateful for what happened then.

“What would I do with Bengali? Moreover, I would never have got to study Chinese,” the prominent Slovak sinologist, 81, says.

“Everything in my life has had a purpose,” she says.

Čarnogurská was the third child of five born to a Catholic family. Her father came from Zamagurie, a region in northern Slovakia, and her mother was born into a prominent wine-making family in Vajnory, now part of Bratislava.

She, her siblings, and parents were devout in their faith, but as Čarnogurská grew older, she began to drift away from the Catholic Church, as a strong sense of critical thinking developed in her.

“In real life, it doesn’t work that when you pray, everything is great,” she says.

After graduating from school, she got a job at a dry-cleaner but left a week later after being forced to pay for damage to an expensive dress that had been stained at her work with Chinese ink. Soon after, she got a job as an orthodontist’s assistant, which led to part-time study at medical school. In turn, this led to her finding work as a school nurse – a job which gave her enough time to sign up for English, and then Chinese, studies at a local state language school.

Čarnogurská recalls that when she was young, she had considered Chinese too complicated a language and was daunted by its tens of thousands of characters. But she began to study it because it was a relatively exotic language at the time that few people paid attention to, and she was inspired by what proving she could master such a difficult language might do for her as she tried to come to terms with being banned from going to university.

“I needed a boost to my self-confidence,” she says.

While she was completing the six-year language course she repeatedly applied to universities for various studies – contacting the Academy of Performing Arts, and other universities in Bratislava – but was always turned down because of her father’s political stance.

Then, in 1963, she tried her luck in Prague, and to her surprise was one of only three young people accepted to study Chinese at Charles University.

One year into her course she dropped her minor subject, English, and took up philosophy instead. Her studies focused on classical Chinese, which, she explains, differs from the modern spoken form of Chinese in the same way that Latin differs from modern Italian.

She completed her studies in 1969.

“I was lucky that I studied during the years when the communist regime was not as strict, between 1963 and 1969,” Čarnogurská says.