If we aren't cautious enough, we could be harvested for iron by AI 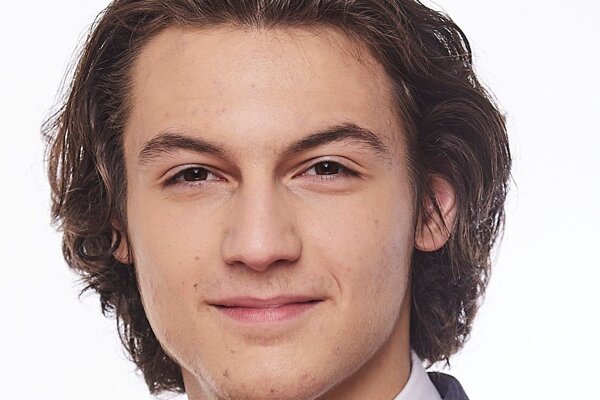 Year 2145: You are constantly on the run. The world has changed in the past decades. At first, it looked like a technological revolution. Artificial Intelligence(AI) was at first made to assist humankind with demanding tasks and calculations. Yet, after a while, we grew lazy, and wanted AI to do more and more, thus giving it more autonomy. It all resulted in your current situation. The most advanced machine called APE is hunting people down for hemoglobin. The only thing that matters now is running further away, because every moment you are not running, APE is only getting closer.

A student from Evanjelické gymnázium Škultétyho 10 in Košice, Filip Šipoš chose the topic "Will artificial intelligence help the world or hurt it?". In his essay, he outlined how difficult artificial intelligence will be to handle once we fully develop it. As he concluded in his writing, "If we aren’t cautious enough and if we won’t emphasize roboethics enough, we might all end up harvested for iron in our blood by a paper clip-making machine."

The paragraph above sounds like a prologue to a sci-fi or a post-apocalyptic book, doesn’t it? Yet, the truth is that we are not as far from a similar future as you might think. Every day and even while you are reading this essay, artificial intelligence is being researched and furtherly advanced by companies like Neoteric or OpenAI. And thus, we are facing a question of whether artificial intelligence will become the backbone of future communities, or whether it will, in the process of accomplishing its goals, eradicate the human race.

Firstly, we need to define and understand what AI is. "It is the science and engineering of making intelligent machines, especially intelligent computer programs. It is related to the similar task of using computers to understand human intelligence, but AI does not have to confine itself to methods that are biologically observable." From McCarthy's definition, we can easily infer that we are talking about intelligent machines and programs capable of simulating and understanding anthropomorphic cerebration and judgement.

Another point we can assume is that programs will be able to simulate decisions, thought processes and even feelings of any person, such as yours and mine. Having the “mindset” of a man with the processing capacity and speed of a computer, it is possible to construe that AI programs and machines will be smarter, faster and more efficient than any human. With that in mind, there are foreseeable advantages and dangers of usage of artificial intelligence in the future.

To illustrate the benefits that Artificial Intelligence might provide in the future world, it’s necessary to analyze what perquisites automation and narrow AI provides nowadays. Looking into the field of employment, an interesting fact emerges; countries with higher robot density (e.g., Singapore: 918 per 10 000 employees) have one of the lowest unemployment rates (e.g., Singapore: 2.6%). With this knowledge, we can refute the argument about AI causing future unemployment. It is true that robots will probably change the way we work and they will surely replace employees in physically demanding and dangerous positions, yet they will create a number of new work opportunities that will easily outweigh all the jobs that are lost in the process of automation revolution. This is only one of the many benefits that AI and automation will provide, but I think it is the most important one for the public. Unfortunately, advancement of AI is not as safe as it might seem.

“The development of full artificial intelligence could spell the end of the human race.” Hawking warns us in his quote that, if we step too far and let AI become too “intelligent”, we might unleash the biggest disaster in human history. One might ask: “But, why would AI turn evil and destroy us all?” Although, we cannot precisely predict how AI will act, or if it will or won’t obliterate all of mankind, we can anticipate that it will judge based on its main goal, creating instrumental goals on the way to accomplish it.

Expanding on the idea of AI turning “evil”, we need to uncover what instrumental goals it might develop and their consequences. To use as an example, let’s assume we have a paper clip making machine that is controlled by AI. We’ll call it APE⁵. It has its main goal which is to make as many paper clips as possible. The first and most fundamental instrumental goal that I will talk about is self-preservation. For an intelligent machine that has a defined goal, being turned off means basically failing to fulfill that goal (because if a machine is turned off, it cannot make as many paper clips as possible). From that we can conclude that it will try to avoid being put off by any means. Another phenomenon that will presumably be significant when thinking about intelligent machines is goal-preservation; the concept of protecting our goals from being changed. Passed down to our clip maker, APEs goal preservation thought process might look something like this: “If my goal will be changed, I won’t make as many clips as possible.” Considering both examples, we can come to a conclusion that AI machines will try to prevent themselves from being recoded or turned off.

Another “dangerous” aspect of artificial intelligence is self-improvement; “The act or process of improving oneself by one's own actions”. If we once again apply this concept to the clip maker, we would see that APE has several areas to improve in, main of them being efficiency. Thus, it would try to expand the production. Expansion would result in higher material consumption, presenting APE with yet another instrumental goal: “Geather as much material as possible.” And one of the sources of iron, from which paper clips are made, is hemoglobin which is a component of human blood.

Summarizing everything stated and answering the initial question, I would say that there is no right or wrong answer. What is certain, is that artificial intelligence will significantly change the world and it is up to us, whether for better or for worse. If we aren’t cautious enough and if we won’t emphasize roboethics enough, we might all end up harvested for iron in our blood by a paper clip making machine.