Lloyd Austin: There is no such thing as a 'light' version of a no-fly zone

The US Defense Secretary visited Bratislava on March 17, and confirmed the arrival of US troops within an emerging NATO unit. 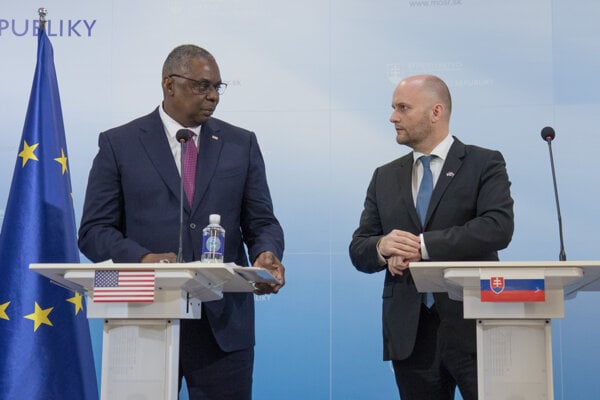 The US and NATO are prepared to do their utmost to help Ukraine, but they will not implement a no-fly zone there.

US Secretary of Defense Lloyd Austin repeated the US stance during his visit to Bratislava on March 17, following a meeting of NATO defence ministers in Brussels a day earlier. Austin and his Slovak counterpart, Defence Minister Jaroslav Naď, discussed aid to support Ukraine in its war with Russia, and the commitment of NATO member states to meet their defence spending commitments.

"We take our commitments towards our NATO allies very seriously," Lloyd Austin told the press conference. He thanked Slovakia for its humanitarian aid and the help it is providing to refugees from Ukraine. Later in the evening he is scheduled to meet President Zuzana Čaputová and Prime Minister Eduard Heger (OĽaNO).

No to a no-fly zone

Regarding a no-fly zone over Ukraine, something which has been repeatedly requested by Ukrainian representatives, Austin stated that it is not a realistic demand, because it would mean a war between NATO and Russia. A no-fly would inevitably mean having to destroy Russia's anti-aircraft missile systems.

Austin reiterated that US troops would not fight in Ukraine, but said the US will do its utmost to help Ukraine to defend itself.

Austin confirmed the arrival of US troops as part of a NATO unit that is currently being created in Slovakia as part of the alliance's enhanced forward presence on its eastern border.

To meet NATO capability goals, Slovakia needs to focus on its ground forces and on building a heavy mechanised brigade, as well as replacing its obsolete Soviet-made air defence technology, including an S-300 air defence system and MiG-29 fighter jets.

Regarding Slovakia's reported preliminary agreement to send its S-300 system to Ukraine to use in that country's defence against Russia, Austin noted that Ukraine has so far managed to prevent the aggressor from dominating Ukrainian skies. The aim of the US now is to support Ukraine in the capabilities that it is already good at. He said the possibility of giving the S-300 to Ukraine is still being discussed by partners.

Naď reiterated his earlier statement that Slovakia will only be able to give up its S-300 system if it has an adequate replacement. Without a replacement, there would be a hole in NATO's own defences.