Roman Mikulec has to explain the choice of company for assistance at the border, which is close to the ruling OĽaNO. 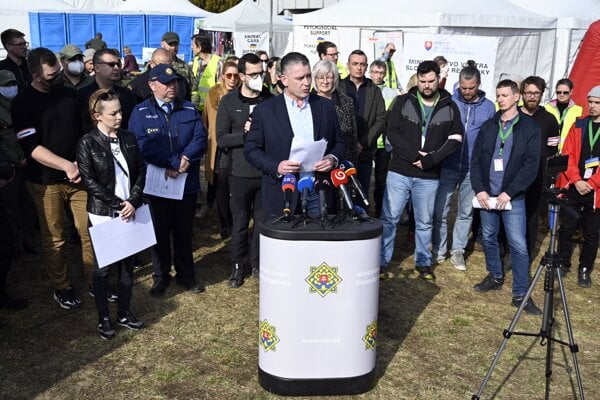 The Interior Ministry has faced criticism for mishandling the refugee crisis at Slovakia’s eastern border since the war in Ukraine started. Volunteers helping at the border voiced objections about the management of the crisis and they often said that the state was rather invisible at the border.

The Interior Ministry has taken over management at the border but they now have to explain why a private company got involved. Critics of Minister Roman Mikulec (OĽaNO) said that the state gave management of the crisis into the hands of a private company.

The minister stated he does not agree but the opposition will attempt to remove him from his seat anyway. His coalition partners will also ask Mikulec questions.

Private company at the border

Emergency situation, shortage of time, lack of state material and personal resources, willingness and immediate preparedness were the main reasons why the ministry chose a private company when establishing the large-capacity crisis centre in Michalovce, according to Mikulec.

“The state did not hand over management of the crisis to just any private company,” Minister said, as quoted by regional daily Korzár. “The state has been managing it from the very beginning in cooperation with volunteering organisations, with everyone who wants to be involved in the process.”