Has it only been two years? The government begins the second half of its term

Two prime ministers, one pandemic and war on the border – so far. And don’t forget the fight against corruption. 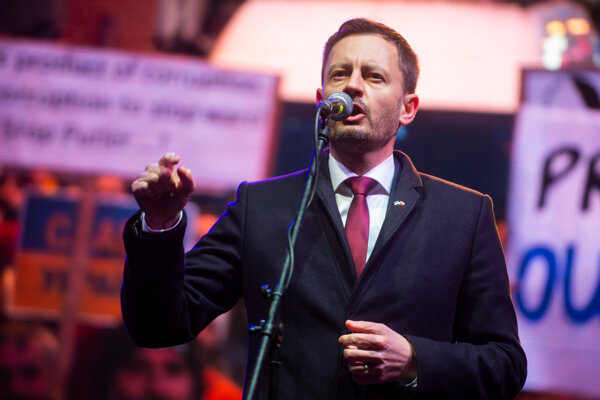 PM Eduard Heger speaking to the protest against the war in Ukraine on March 4 in Bratislava. (Source: TASR)
Font size:A-|A+  Comments disabled

Welcome to your weekly commentary and overview of news from Slovakia. One month into the war, the government is clear on where it stands. Slovakia supports joint European gas purchases. MPs pass a law to make life easier for refugees – and make a historic apology for the Holocaust.

Subscribers can find the link to the PDF of the March issue of The Slovak Spectator below.

The turn of March marks a number of milestones for the Slovak government: it’s been two years since the four-party coalition led by OĽaNO, which unexpectedly emerged as the clear winner of the 2020 election, took over. This Friday, the first day of April, will be one year since Eduard Heger took over as prime minister after OĽaNO leader Igor Matovič stepped down as premier following a month-long coalition crisis triggered by his murky purchase of a Covid-19 vaccine from Russia.

It is no longer a current topic in Slovak politics, but it is worth remembering that the Sputnik deal was a major deviation from the government’s otherwise very clear foreign policy line. As a side note, Matovič negotiated it with Kirill Dmitriev, CEO of the Russian Direct Investment Fund, who has been put on US and UK sanctions lists following the Russian invasion of Ukraine.