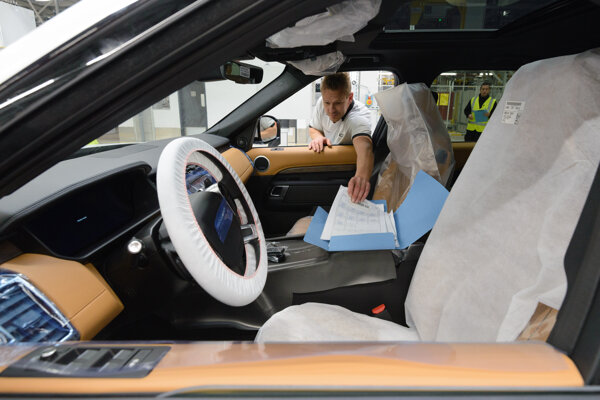 Nitra-based carmaker Jaguar Land Rover is one of companies that applied for wage compensations within the kurzarbeit scheme for March. (Source: TASR)
Font size:A-|A+  Comments disabled

When the Covid-19 pandemic hit Slovakia and lockdown was introduced, businesses across the country began to suffer. Soon, companies were calling on the government for help to keep going and avoid lay-offs.

One of the measures the government responded with was the German-inspired government-subsidised short-time work scheme, commonly known as ‘kurzarbeit’.

This involves the state providing money to cover part of staff wages.

The scheme proved to be a success and the government has now turned it into a permanent measure to be used when companies find themselves in trouble because of external events, such as a pandemic, or the war in Ukraine.

“It is not state aid, but an instrument that serves to maintain employment in times of crisis,” said Lucia Kovarovič Makayová, spokesperson for Volkswagen Slovakia. The firm, which is the oldest and biggest carmaker in the country, itself used kurzarbeit during the pandemic.

“It is a very suitable solution in which all three parties gain: the employee, the employer, and the state.”

The benefits it brings to the employee are job security, and that part of their wage is paid by the state. The scheme also temporarily reduces employer wage costs. This should help in retention of a skilled workforce and underpinning stability while maintaining international competitiveness. At the same time, it saves state spending on workers that would otherwise find themselves unemployed, shortfalls in taxes and levies are avoided, and the country does not lose its attractiveness and international competitiveness, explained Kovarovič Makayová.

Under it, an employer can apply for compensation for a portion of wage costs in emergency situations caused by external factors which result in the employer being unable to assign an employee work.

“A typical example of an external factor is the ongoing pandemic,” Pavol Kundrík, lawyer at the CMS Slovensko law firm explained in a memo. “But it could also be a state of emergency or a national emergency, or force majeure.”