"I just went out to brush my teeth." Jill Biden surprises refugees in Košice

Ukrainian kids sang Jill Biden a song by a composer who was killed for being Ukrainian. 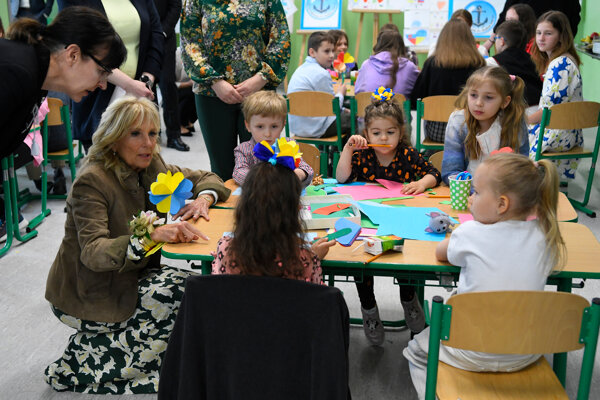 In the crisis centre, where Jill Biden spent the morning, everything was neat and clean. Volunteers sat in front of the entrance to the canteen. When my daughter and I moved in their direction, they immediately spoke Ukrainian. Outdoor on the tables there were apples, bananas, soda bottles and baskets of fruit with cardboard carrying a "Happy Mother's Day" inscription in Ukrainian.

It was May 8, the second Sunday of May and, like most countries of the world, Slovakia, the USA and Ukraine celebrate Mother's Day. The First Lady of the United States visited the crisis centre for assistance to Ukrainian refugees and a school in Košice to mark the day with mothers and their children who make up most of the displaced persons from Ukraine in Slovakia.

Originally from the Rivne region in Ukraine, 21-year-old Yulia is a fourth year student at the Košice Technical University and works as the volunteer coordinator here. She was lucky to personally talk with the wife of the President of the United States about her own volunteer experience and how she, due to the war, became a guardian for her seven-year-old brother, first-grader Dmitry, because their parents are unable to leave Ukraine.

"I study logistics at the university, so coordinating volunteers for me is also very valuable professional practice," smiled the girl in a spring-green vest, the color they call "salad" in Ukraine. 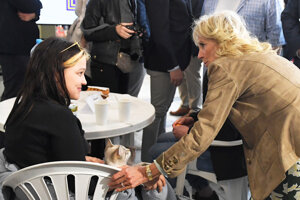 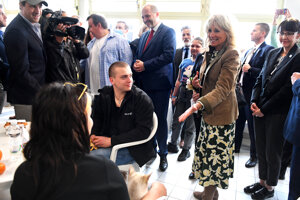 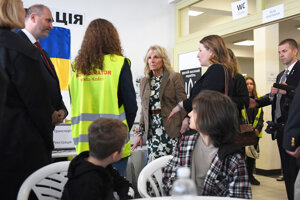 "The most difficult part was at the beginning of the war, when the flow of newly arrived Ukrainians was huge. Every day we had to help about 4,000 refugees. We provided them with hot food, clothes and the first overnight stay in containers nearby and helped them find places to stay in Košice for them longer term. Those who were looking for shelter elsewhere we sent by bus and train to other EU countries. Now about 400 pass our center daily. They are assisted around the clock by 60 regular volunteers, whose work I coordinate.”

Jill Biden praised the Ukrainian girl for caring for her younger brother and at the same time managing to help other people, and wished that they will be able to meet with their parents as soon as possible.

"I am now looking for a school for Dmytryk. It is unusual and very difficult for a seven-year-old boy to be away from his parents, but I am very grateful to Slovakia for being safe and that he is able to continue his studies," said Yulia.

Jill Biden — wearing a khaki jacket over her white dress with a black pattern and sporting a flower wrist corsage — shook hands and talked with many Ukrainians who had breakfast in the dining room of the Crisis Center. 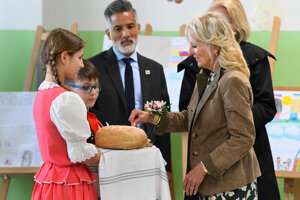 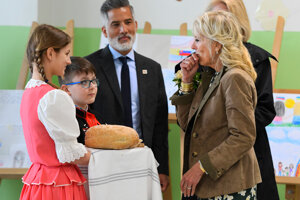 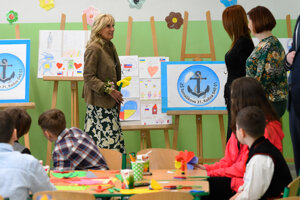 For Olga from Kherson, May 8 is only her second day in Košice. She became emotional when she recalled the difficulties she and her son faced as they escaped from occupied territories. She said she had no idea that the first lady of the United States was coming to Košice.

"I came out of my temporary container room to brush my teeth, and there were some security men checking everything. They looked into my bag, but nothing but a toothbrush was found there. It's a test, it's a test. She stopped at my table, I felt uncomfortable at first..."

Here the conversation was taken over by another Olga, from Poltava, who also wanted to share her impressions of her meeting with Jill Biden.

"I didn't immediately realise that it was the first lady from America. It was a surprise to us. She was probably brought to us by those helicopters. Earlier a boy from Kharkiv sitting at a nearby table, as he heard them, shouted to me: "Babushka, lie down! Lie down, the Russian bombs are flying at us!" he cried, bursting into tears. His mother had just left for food, so I wiped his tears and could barely hold back crying myself — how many horrors Ukrainian children have had to endure."

After a visit to the crisis centre, Biden went on to the secondary school at Tomášikova Street. Many Ukrainian children study there, so recently two classes of entirely Ukrainian students were formed.

"You need to know that you have our support. I say this on behalf of the entire American people — our hearts are with you," Biden assured the mothers of Ukrainian children she met at the school.

For the high-ranking guest, 12-year-old Anastasia (Nastya) Starostenkova from Kyiv with two classmates of hers sang a well-known Ukrainian song "Shchedryk", the English translation of which became the world-famous Christmas song "Carol of the Bells".

Tragically and symbolically, the life of the author of this merry song, composer Nikolai Leontovych, was cut short 101 years ago by a bullet fired by a Chekist, a servant of the Russian-Soviet special services. Leontovych was shot only because he was Ukrainian, a Ukrainian who taught music at the railway school in Donbass and kindly gave shelter to his murderer for the night.

Nastya shared her emotions from the unusual acquaintance:

"I was a little worried to perform in front of such a respected guest, but the meeting turned out to be truly sincere and joyful. We laughed a lot, hugged, made paper flowers. She gave us t-shirts with a picture of the White House, water bottles, handbags and eco-bags, which we and our mothers painted during the meeting."

Julia Bair
Julia Bair is a Ukrainian journalist, essayist and poet from Lviv. Due to the war had to leave her home with her daughter and move to Slovakia. Her articles describe their life in Košice.
Comments disabled
Send the article by email