Zelensky to Slovaks: Be Ukraine's voice in the EU 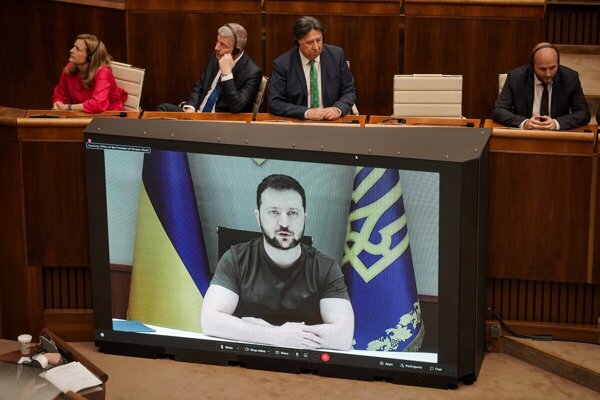 "If we fail to stop the Russian troops, they will come everywhere they can, including to the territory of Slovakia," Ukrainian President Volodymyr Zelensky said in his speech to the Slovak parliament on May 10, the 75th day of the war in Ukraine.

The first tool to help stop the invaders are weapons, while another important tool is the sanctions, the Ukrainian president stressed during his speech broadcast to the Slovak MPs through teleconference. 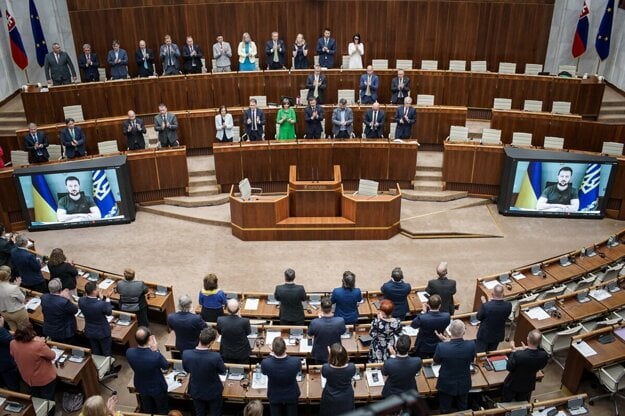 He highlighted energy sanctions and noted that Ukraine realised these were difficult for the landlocked country. Slovakia is among the member states demanding a derogation from the embargo on Russian oil, which should be part of the next package of sanctions.

"I want to thank you for all the help Slovakia has provided Ukraine," Zelensky said to the Slovak parliament. He said he valued the military aid and solidarity that Slovakia has shown Ukraine even before February 24, when the invasion started.

Zelensky mentioned 1968, the year when the Warsaw Pact troops invaded its ally, Czechoslovakia, to put an end to the democratisation process in the country known as the Prague Spring.

"Friends of Ukraine have shown solidarity and have helped make sure Russia would not be able to repeat the year 1968," he said.

Zelensky expressed the determination of his country to join the EU, and to be able to independently decide on its own future. He asked Slovakia to be Ukraine's voice in the EU.

Korčok said he had no doubts the war was going to end in victory for Ukraine and for Europe.

Slovakia, led by the government of Eduard Heger, has supported Ukraine's ambition to join the EU. The prime minister presented Slovakia's plan that should help Ukraine to become and EU member relatively fast to EU leaders in March.

The MPs, most of the cabinet including PM Eduard Heger, and the Ukrainian Ambassador to Slovakia Yuri Mushka were present in the house to hear his speech. Far-right MPs of ĽSNS and Republika did not attend, according to the TASR newswire.

Zelensky addressed several parliaments, including the European Parliament, and protest gatherings in this way since the start of the Russian invasion of Ukraine.

Zelensky previously addressed the anti-war protest in Bratislava, which took place on March 4.

Slovak MPs voted to allow Zelensky to speak in the Slovak parliament last week, when 101 out of 115 present MPs voted in favour of it, including a number of opposition MPs of Hlas and Smer. The leader of the latter, Robert Fico, voted in favour of the motion, but later said he was not going to be present to hear Zelensky speak, and called the Ukrainian president a liar.

Fico, as well as other Smer MPs, left during the speech, Korčok told journalists afterwards. He said he considered it cowardly and indecent.