Coalition partner SaS did not veto the proposal, coalition determined to work out the looming crisis. 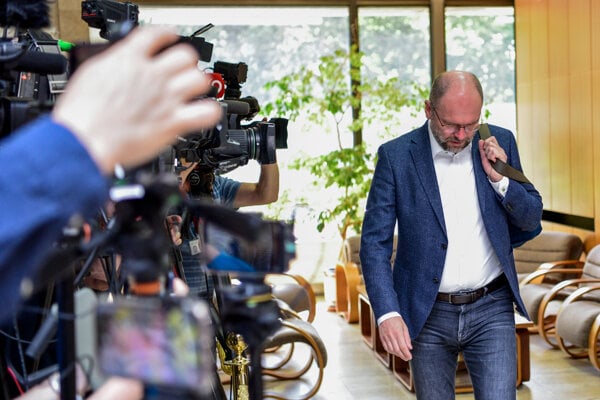 Allowances for foster parents, people in material need, allowances for carers and for personal assistants should be hiked by €100 for May as a one-off measure as relief from the effects of growing inflation in Slovakia.

The cabinet of Eduard Heger approved the respective amendment to the decree on some measures in the labour, social and family affairs area at its May 11 session.

“The decree is proposed due to the rising inflation caused by the economic consequences of the Covid-19 pandemic and is concerned with questions about abolishing some pandemic measures," the Labor Ministry stated in the passed document.

They will not vote for anti-inflation measure

The cabinet's decision on the anti-inflation measures was expected following the hints of Finance Minister Igor Matovič (OĽaNO), that the coalition partner Freedom and Solidarity (SaS) was ready to leave the coalition if the anti-inflation package was passed as presented. SaS never confirmed this and in the end, they did not veto the proposal. They merely stated that they did not approve and that they would not support it in parliament.

“It will pass in the cabinet, and if [the coalition partners] want to push it through the parliament with the votes of the Hlas party, so be it… We will not raise our hands for this,” said SaS leader, Economy Minister Richard Sulík, as quoted by the TASR newswire.

He believes the measure to be unfair. SaS objects to the allowances being funded by cutting the budgets of municipalities. He criticizes funding the allowance bonus with money originally allocated to the municipalities. “They’ve been through a lot, they had to suffer through much higher expenses during the pandemic and afterwards they struggled with funding aid for Ukrainian refugees and now they are struggling with higher energy costs,” Sulík said. He expressed worries that the measures may land some municipalities in dire financial difficulties.

Heger wants the coalition to stick together

The ruling coalition is working on getting SaS onboard and persuading them to support the inflation relief package, said Prime Minister Heger (OLaNO) after the cabinet session.

"The negotiations are tough, but they are moving in the right direction," he said as quoted by TASR.

Following last week's vote on Robert Fico in parliament and the disagreement over the anti-inflation package, several observers said the ruling coalition was closer to collapse than ever before.