Three rescue teams and a helicopter set out to help. 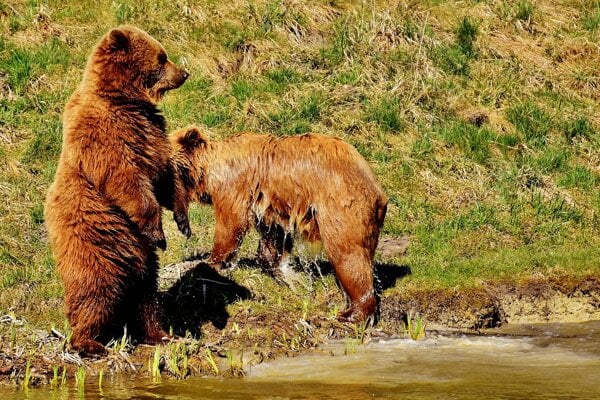 Meeting a bear does not necessarily mean that it will attack you. (Source: Pixabay)
Font size:A-|A+  Comments disabled

With upcoming summer, the bears have woken up and are strolling near tourist paths. Two tourists in Drábovka, Poľana have fallen victim to such an encounter, shortly before a woodsman also crossed paths with a bear and its cubs in Kyslinky.

The two men were found in a hard-to-reach terrain, which complicated the rescue mission, reported Vladimíra Fabriciusová of the Protected Area Administration (CHKO), as quoted by the My Zvolen news website.

One tourist was heavily injured and needed to seek immediate medical attention, which called for helicopter transport. The men were on a tourist path, half an hour from their hotel, when a bear with cubs attacked.

Supposedly, the bear returned after attacking the first time, which is unusual, Fabriciusová said.

The other man escaped with only light injuries; however, his friend will need to remain in a hospital for some time.

The incident in Drábovky occurred just two days after a woodsman was attacked by a bear with cubs while on his work routine.

Without a phone signal, he had to walk in an injured conditions for 300 metres to get help from his colleague. The woodsman reports that he tried to run away from the bear, when it reached him and attacked him from the back.

Fabriciusová stated, as reported by My Zvolen, that the incident's reconstruction was postponed due to the current frail mental state of the victim.

Bear sightings and how to avoid them

These bear attacks are not the first ones of the season and not necessarily unusual either. In extreme cases, bears grow bold and wander off near villages and towns to rummage through garbage. This was the case of a bear in the Low Tatras. However, State Nature Protection reports that putting a bear down is the absolute last resort for them and an extreme measure.

When it comes to forests or tourists paths, authorities usually warn the public about bear sightings with signs, explaining that a general rule is to create reasonable noise to scare the bear off, and avoid approaching a bear with cubs. On the other hand encountering a bear does not mean that you should expect an attack. Bears are still believed to be shy and will choose to run away rather than attack.