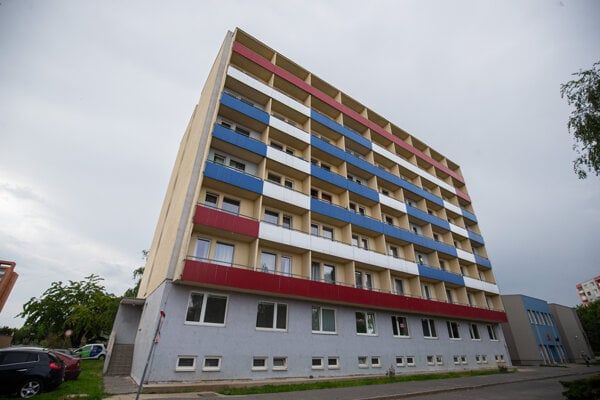 From outside, the three-star Spectrum hotel near the Trnava city centre looks ordinary. Only the balconies in the colours of the Slovak flag catch one's interest. However, unusual things are happening inside. In recent months, it has become a refuge for hundreds of Ukrainian refugees.

People fleeing Ukraine have not only found a place to stay at the hotel. The CEO of the hotel also helps them look for accommodation in private households, temporary jobs, and vacancies in kindergartens.

The conference rooms in the basement turned into a play area for children, a computer room for online teaching and a large area for clothing storage. Every day volunteers organize a Slovak language course. Several Ukrainian TV stations were added to the TV sets.

Immediately after the war started, Peter Cák offered the hotel to refugees via a state web site and the Who will help Ukraine initiative.

As there was incredible interest in staying, he drove right to the border to get people. Later, when Ukrainians learned about the hotel from their acquaintances, they began to contact him themselves.

"When we found out that they didn't have money for food, we started cooking for them," says Cák.

The hotel was gradually filling up, but the promised help from the state did not come. Cák had to look for a solution. At the same time, he did not want to be misused. He introduced a system that still works today, providing accommodation and meals for refugees for the first ten days free of charge.

"Those who don't have anything don't pay for a longer period of time. This is handled individually. When someone comes in an expensive car, I ask for
money," he explained.

However, Ukrainians rarely stay in the hotel for long periods. Via social media, Cák tries to help them find longer-term accommodation.

More than 430 refugees have passed through the hotel. About a quarter stayed only a short time and continued west. Fifty refugees found accommodation on their own, the rest did so with the help of hotel staff.

The others are at work

"Hello, welcome, where are the others?" a volunteer asks at the beginning of the Slovak language course.

"The others are working," an older woman replies. Only three Ukrainians are at this lesson, part of a course that takes place every evening, and none of them live in the hotel any more.

Sometimes the conference room for 30 people is filled up, but now the Ukrainian women are picking strawberries. The hotel CEO helped them find the temporary job.