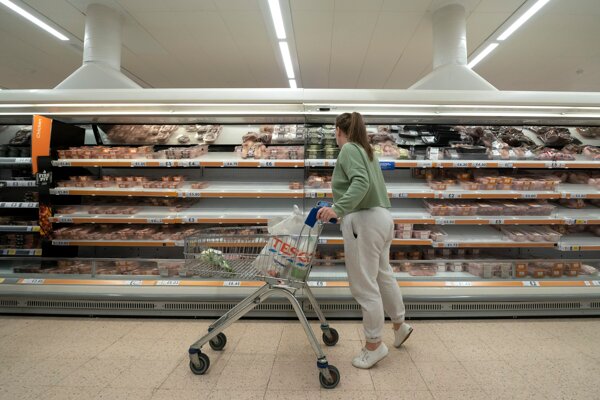 Slovakia’s economy reached pre-pandemic values in the first quarter of 2022 when its gross domestic product increased by 3.1 percent year on year.

Economic growth stood at 1.4 percent at the end of last year. Its dynamics thus sped up and surprised analysts.

The Statistics Office, which published the first GDP flash estimate of this year on May 17, added that the GDP rose by 0.4 percent quarter on quarter. Analysts of the monetary analysis, statistics, research and market operation division at the National Bank of Slovakia (NBS) said the economy rose somewhat more slowly than they had expected in their March prediction.

“The war in Ukraine slowed the already initiated catch-up to the pre-pandemic GDP level,” they explained. With that and the resulting uncertainty involving existing problems with supplies have exacerbated and import prices have reached record levels.

The economy is lagging behind pre-pandemic levels by 0.8 percentage points, NBS analysts added. According to UniCredit Bank analyst Ľubomír Koršňák, “So far, the economy has reached roughly the levels from the first quarter of 2019.”

Domestic consumption and investment helped the Slovak economy grow year on year, whereas foreign demand decreased. “Despite rising prices, households do not seem to have dampened their consumption but savings,” said Koršňák. Stronger domestic demand, he added, is thus expected to have been the main component of economic growth at the beginning of the year.

The wholesale and retail sector, accommodation and catering services contributed to the growth of value added in the first four months of 2022. The automotive industry, conversely, recorded a decline, according to the flash estimate.

“The unfavourable development of the industry dampened the positive effect of consumption triggered by the relaxation of coronavirus measures,” NBS analysts pointed out. They added that investment activity remained subdued due to a lack of government investment and the rather poor drawing of EU money.

In the published GDP flash estimate, the Statistics Office also said that more people worked in the first quarter of this year than in the same period last year. As many as 2.4 million people had a job, which is an increase of 2.1 percent.

The labour market was not impacted by the war or the coronavirus pandemic in the first quarter of 2022, and employment developments turned out to be better than the national bank initially expected. “Refugees took jobs that were uninteresting to people in Slovakia and helped reduce labour market tensions,” NBS analysts wrote in their commentary.

Analysts across the board remain skeptical about economic growth in the next quarters of 2022, naming the conflict in Ukraine, supply chain challenges and high inflation as the major negative factors.

“The economy should, however, be supported by public investment,” Koršňák said. Slovakia is still trying to spend all EU money from the previous, 2014-2020 period allocated to it. The country has so far used 58 percent of available resources and is at the bottom of EU rankings in this regard, the analyst noted. Analyst Jana Glasová of 365.bank added that Slovakia would also receive EU money for its post-pandemic, recovery plan.

Yet, she and Koršňák expect Slovakia’s economic growth to be slower than previously thought, adding that it could reach 2.5 percent.