Why Matovič asks us to be colourblind

The obnoxious nature of the debate is only one of many issues that is wrong with the events of the past week in Slovakia. 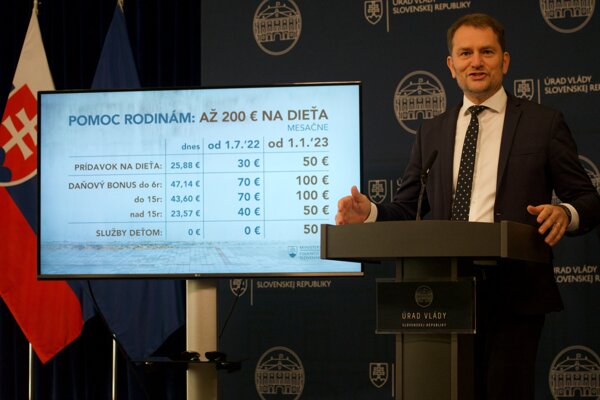 Welcome to your weekly commentary and overview of news from Slovakia. Matovič hopes his “pro-family coalition” will persevere, even though it is not the same as the ruling coalition he leads. A pivotal verdict is expected in the trial of a former elite prosecutor. US congressmen tell Facebook to stop spreading disinformation in Slovakia.

Coalition talks about families but focuses on fighting

The worry that many inhabitants of Slovakia feel as they see the price of a tank of petrol or the bill for their regular grocery shopping grow higher by the week is only multiplied when they look up from the receipts to see what their government is doing for them.

The unsatisfactory answer is: not much. There is, as always, a lot of squabbling and grandstanding, but the actual plans of coalition leader Igor Matovič are anything but grand. He has designed a €1.1-billion package of measures that he dubs, depending on the occasion and the audience, an anti-inflation package or a pro-family package. To push it through, Matovič has embarked on the tactics at which he is most proficient – attacking the people around him, most frequently his own coalition partner, Freedom and Solidarity (SaS).

The conflict between Matovič’s OĽaNO and SaS escalated during the parliamentary debate on the proposal, and on a Matovič-proposed special tax on processing oil from Russia, which – like the rest of the package – SaS refuses to support. The obnoxious, personal nature of the debate is only one of many things wrong with the past week’s events in Slovakia.