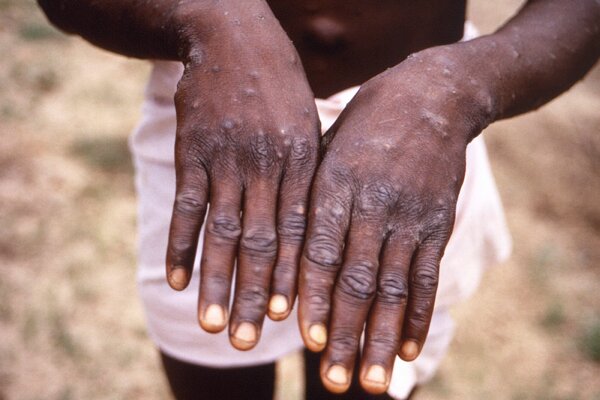 As more cases of monkeypox are detected in Europe and North America in 2022, some scientists who have monitored numerous outbreaks in Africa say they are baffled by the unusual disease's spread in developed countries. (Source: TASR/AP)
Font size:A-|A+  Comments disabled

Unlike other European countries, Slovakia had not recorded any confirmed or suspected case of monkeypox by Tuesday, May 24, the Public Health Authority said.

Monkeypox, which was first identified in 1970 in the Democratic Republic of Congo, is a disease spread between animals such as squirrels, primates and people, currently the most prevalent orthopoxvirus infection in humans after the eradication of smallpox and the cessation of universal smallpox vaccination.

The disease lasts from 2 to 4 weeks.

Increasingly reported in Africa, the first recent case in Europe was recorded in Great Britain on May 7 when a person travelling from Nigeria had imported monkeypox to the country.

The latest confirmed case appeared and was reported in Austria, a neighbouring country to Slovakia. Nine countries in the European Union, mostly in the south and the west of the Union, confirmed 67 cases and more than 40 suspected cases are under investigation as of May 23.

“Neither did Slovakia record cases of the disease in the past,” the Public Health Authority said. Slovakia, however, is not an endemic area for monkeypox. As Slovaks have a wide range of travel options, the Authority said, it could not rule out that Slovakia may confirm monkeypox cases.

“Monkeypox does not spread easily among people,” the European Centre for Disease Prevention and Control (ECDC) emphasised. The Centre added that human-to-human transmission occurs through “close contact with infectious material from the skin lesions of an infected person, through respiratory droplets in prolonged face-to-face contact, and through fomites.” 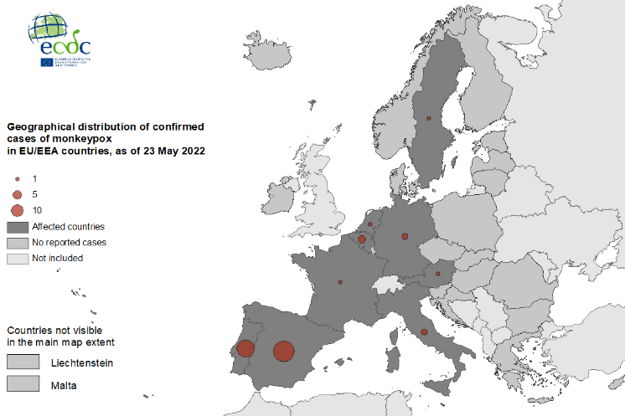 Geographical distribution of confirmed cases of monkeypox in EU/EEA countries, as of May 23, 2022. (Source: ECDC)

As for the current outbreak, the ECDC said that the new monkeypox cases were mostly diagnosed among gay men. “The nature of the lesions in some cases suggest that transmission occurred during sexual intercourse,” the ECDC said, noting that people have had mild symptoms.

The European Medicines Agency has not authorised any vaccine against monkeypox in the EU. “Early post-exposure vaccination with smallpox vaccine may prevent the disease or make its course less severe,” the ECDC said.

The Public Health Authority in Slovakia does not anticipate a large-scale epidemic in Slovakia but sporadic outbreaks. “There is a real risk of the disease developing,” the Authority said.