Europeans to use a single charger for their small devices

New rules set to curb electronic waste and help consumers in the EU. 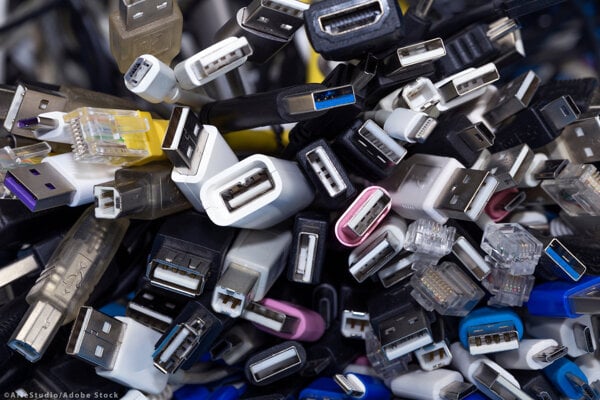 EU consumers will be able to use a single charger for all their portable electronics devices from autumn 2024. (Source: European Parliament)
Font size:A-|A+  Comments disabled

The European Union is going to reduce electronic waste by making it possible for its citizens to use one single charger for their portable electronic devices.

Consumers will no longer need a different charging device and cable every time they purchase a new device. However, people will still be able to choose whether they want to purchase a new electronic device with or without a charger.

Following a June 6 agreement on an amendment to the Radio Equipment Directive between the European Parliament and the Council, the USB Type-C will become the common charging port for several small electronic devices across the EU.

The new rules will enter into force in two years.

Mobile phones, tablets, e-readers, earbuds, digital cameras, headphones and headsets, handheld videogame consoles and portable speakers that are rechargeable via a wired cable will have to be equipped with a USB Type-C port, regardless of their manufacturer, the European Parliament said.

Laptops will also have to be adapted to the requirements by 40 months after the entry into force.

The European Parliament is convinced that the new rules will result in increasing the re-use of chargers, while Europeans could save up to €250 million a year on unnecessary charger purchases.

Disposed of and unused chargers are estimated to represent about 11,000 tonnes of e-waste every year.

The European Parliament and the Council have yet to formally approve the agreement. It will enter into force 20 days after its publication and its provisions will start to apply after 24 months.

The new rules will not apply to products placed on the market before the date of application.

The Parliament has been asking the Commission to table a proposal on a common charger solution many times. The proposal was eventually presented in September 2021.