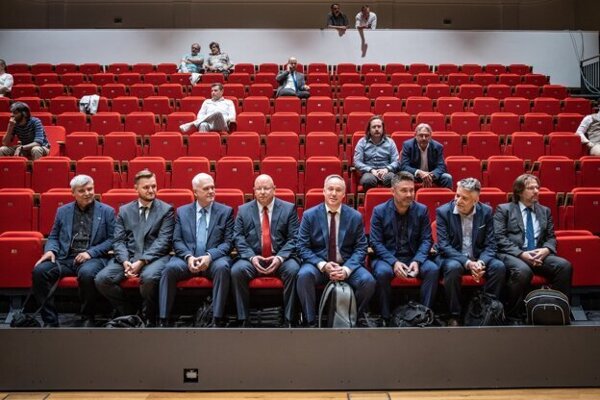 Eight men are running for the post of the public-service general director. Outgoing Jaroslav Reznik is one of them. (Source: Sme - Jozef Jakubco)
Font size:A-|A+  Comments disabled

Welcome to your weekly commentary and overview of news from Slovakia. MPs are to elect the head of the public-service broadcaster. Thousands of teachers made their views known by demonstrating in the streets of Bratislava. Parliament will consider whether to overturn a presidential veto; Matovič wants no compromise. The bear scare is real, but not data-based. Facebook banishes a major Slovak disinformation spreader.

Coalition has a lot to prove in RTVS vote

The election of a new head for the public-service broadcaster RTVS, after one term under Jaroslav Rezník, is an important moment for the institution, as well as for the ruling coalition.

Rezník is running for re-election, but has earned little acclaim in the post from the professional community. Parliament first elected him to the top post at RTVS under the last Smer-led government amid controversy, with the then culture minister lobbying against him. During his tenure, the newsroom at RTVS has been through a major crisis, complete with the departure of several reporters and open letters alleging a hostile atmosphere and suppression of critics.

In the process, RTVS has lost a large proportion of its most experienced reporters to other newsrooms across Slovakia. The man they criticise most is Vahram Chuguryan, the newsroom head appointed by Rezník. Chuguryan faced repeated allegations of “balancing” the news with disinformation and Russian propaganda narratives. He was finally forced to leave after the Russian invasion of Ukraine, when he invited a well known conspiracy theorist to air his opinions on public-service television.