Police say Makó did not initiate the crime, and cooperated with investigators in Purgatory and other major cases. 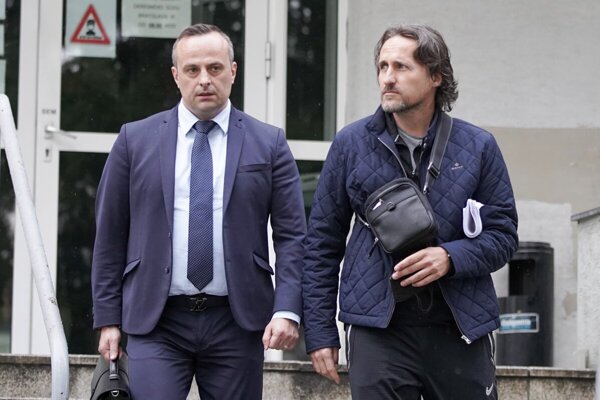 Two charges were dropped against former head of the Financial Administration’s criminal office Ľudovít Makó, known to the public as the key witness in corruption cases involving high governmental and police officials.

Makó, who was part of a sophisticated corruption scheme as he described it to the police, has been cooperating with investigators and testified in a number of high-profile corruption cases, including Purgatory that also involves charges against a former Police Corps president.

The investigator dropped some charges against Makó, according to a resolution signed by Prosecutor Michal Šúrek of the Special Prosecutor's Office, the Sme daily reported.

Makó's cooperation helped move forward major cases in which perpetrators have since been handed effective sentences, the prosecutor explained. He continues to cooperate with the criminal prosecution bodies and as such, he can be cleared of charges unless he was an organiser of the criminal activities. This, according to the prosecutor, is not Makó's case.

"It needs to be said that it is thanks to the criminal complaint and testimonies by Makó that the criminal prosecution bodies are aware of the above-mentioned corruption act, other corruption acts, as well as of the act legally classified as founding [...] a criminal group and the crimes committed thereby," Prosecutor Šúrek noted.

Makó was cleared of charges in the case where he was accused of (and admitted to) taking bribes from a group of businesspeople, including former Slovak Information Service (SIS) intelligence agent František Böhm, who later testified as a cooperating defendant, too.

Another case in which Makó no longer faces charges involved renting offices for the Financial Administration's criminal unit in Prešov, which he headed at that time. Entrepreneur Štefan Poláček was given the contract without due tender. The police believe, based on Makó's testimony, that Poláček paid a bribe of €100,000 to Financial Administration officials, Sme reported.

Makó's arrest in 2020 turned out to be a breakthrough success for the Purgatory team because he immediately started cooperating with investigators. He testified against influential people, including oligarch Norbert Bödör, former police chief Tibor Gašpar, and former special prosecutor Dušan Kováčik, who was found guilty of corruption and will serve a prison sentence.

Makó said that he received a €100,000 bribe, giving one half to Kováčik and divided the other half between himself and former Slovak Information Service (SIS) intelligence agent František Böhm. The latter was also arrested by the police, but committed suicide after his arrest. Böhm confessed before his death.

Makó previously collaborated with what the prosecution described as an organised group that worked within state structures under Smer governments led by Robert Fico. Prosecutors in the Twilight case allege that Fico and Robert Kaliňák, former interior minister for Smer, were aware of and involved in the activities of the criminal group, also based on Makó's testimony.

Makó was allegedly involved in bribing the former director of the intelligence service, Sme Rodina nominee Vladimír Pčolinský, and one of the richest people in Slovakia, lawyer Zoroslav Kollár, now found guilty of bribery after confessing. Speaking to journalists following Pčolinský's formal confession, Kollár insisted that he had never met Pčolinský, and that he does not know what happened to any money given to Makó.