Coalition MPs in conflict after the law was passed with the help of the far right. 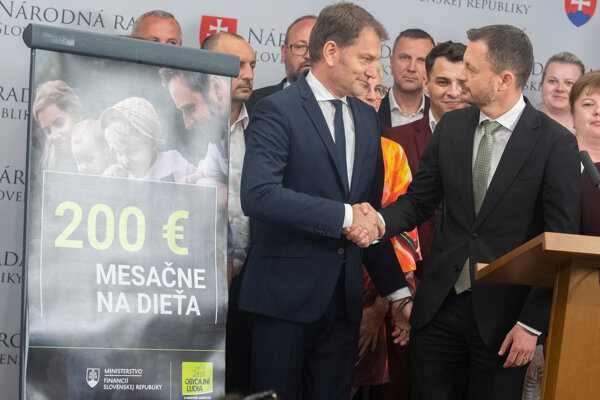 Parliament overrode the veto of President Zuzana Čaputová regarding the package of measures designed by Finance Minister Igor Matovič (OĽaNO).

The MPs first passed the package of measures amid controversy earlier in June. The price tag of the package has been estimated at about €1.2 billion, or about 1 percent of the state budget. The costs of the measures were the main reason the coalition partner Freedom and Solidarity (SaS) gave for rejecting its support for the package.

How MPs voted on the veto:

AGAINST OR ABSTAINED: Smer-SD.

“Thank you to everyone who have been praying, begging, keeping fingers crossed, lobbying. A great thing has been done,” Igor Matovič wrote in his first reaction on Facebook.

Even though the law now becomes effective even without the president’s signature, it does not mean the measures will materialise soon. The president said she was going to turn to the Constitutional Court to assess the law-passing procedure if the MPs break her veto, which means its effectiveness may yet be postponed.

The pro-family package was supported by 77 out of 142 present MPs. To be passed, the law needed the support of 76 votes.