After a campaign on freedom, they came up with fake presenter Puškárová 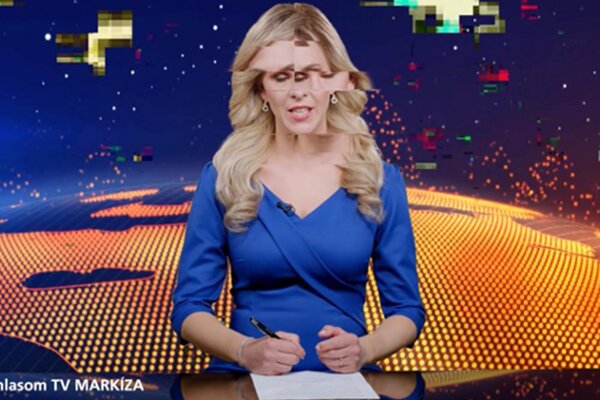 In the video, the presenter talked about the futility of wearing face masks and vaccination. (Source: Courtesy of O2 Slovakia)
Font size:A-|A+  Comments disabled

Six years ago, the mobile operator O2 Slovakia reminded its customers that freedom and democracy were not a matter of course under the former regime. Before 1989, crossing the state border was a criminal offense, the operator pointed out in SMS messages it sent to customers who crossed the Slovak state border on November 17, 2016. Similar information was displayed to customers when visiting foreign websites.

The company won several advertising awards, including the Via Bona award in the Fair Market Player category, for this campaign and its courage to broach sensitive social topics.

The mobile operator repeated its success in the same category with another awareness campaign this year, this time with a campaign on misinformation it launched in May last year. O2 Slovakia received the Via Bona award in the Fair Market Player category at the ceremony in Bratislava on June 29.

In addition to the controversial topic that divides Slovak society to this day, it was the fact that O2 Slovakia “acknowledged and focused on the weaknesses of the business in which it operates” that won the award, according to the ambassador of this category, Zuzana Petková, from the Stop Corruption Foundation.

The jury, which decided on this year’s nominations in the Fair Player category, was also interested in the ecological project of a family farm near Partizánske, an online conference connecting IT with industry from Deutsche Telekom IT Solutions Slovakia, and the LGBT + campaign from Dedoles.

O2 Slovakia, which feels co-responsibility for how people use mobile data, says that it perceives the need to combat misinformation and hate speech in the online space sensitively and has been working on this for several years.

“We are aware of the shadowy aspects of our business, which is why we have strategically focused for a long time on the development of critical thinking and media literacy,” said Natália Tomeková, company manager for communication and corporate social responsibility at O2 Slovakia.

The company creates its own projects as well as cooperates with organisations and educational institutions. The mobile operator ran for the Via Bona award for the year 2021 with the Zdieľaj s Rozumom (Share with Sense) campaign, which builds on projects already implemented in the past.

The project started with a fake video starring actress and presenter Kristína Tormová, who with the help of artificial intelligence, transformed into the TV news anchor Zlatica Švajdová Puškárová. In the video, she talked about the futility of wearing face masks and vaccination. The video became the most viral short in the company’s history when two million people saw it.

The operator claims that it is attempting to communicate the topic of misinformation in a friendly and clear manner. As part of the project, it launched a media literacy quiz, to which it attached advice and instructions on how to verify messages.

“We wanted to teach people simple procedures and tell stories that will show them that the shame is not being tricked, but not learning from it,” said Tomeková.