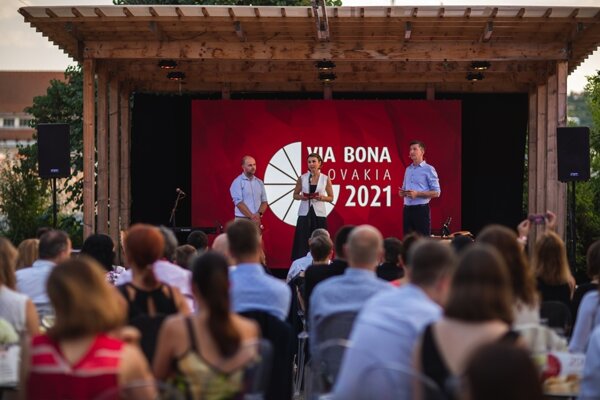 The Via Bona Slovakia awards, granted to companies for their responsible and fair business, were granted for teh 22nd time. (Source: Courtesy of the Pontis Foundation )
Font size:A-|A+  Comments disabled

Helping victims of domestic violence. The development of a new method of psychotherapy using virtual reality. The systematic preparation of children and young people for their digital future. These are some of the most inspiring examples of responsible businesses that have won the 2021 Via Bona Slovakia award.

Altogether 48 projects from 38 small, medium-sized and large companies competed in seven categories of the Via Bona Slovakia awards; 19 were shortlisted. The awards ceremony took place on June 29.

“Despite the challenging time, this year also showed us that the business sector in Slovakia is developing and is aware of its responsibility,” said Michal Kišša, CEO of the Pontis Foundation. “The year provided examples of companies that behave fairly to the environment, employees and suppliers, create more modern and educated communities, support digital skills or help prevent misinformation.”

Compared to previous years, there were fewer applications when the Pontis Foundation attributed this to the war in Ukraine.

“At a time when companies could have worked on their nominations, war came,” said Kišša. “So it's understandable that most gave priority to helping people who had to flee their homes.”

Responsible Large Corporation: Swiss Re Slovakia – This company active in the insurance sector is striving to make the world and local communities more resilient to external influences. It looks for ways to cope with the consequences of coming changes.

Responsible Small/Medium-Sized Company: GoodRequest – The IT company has pursued the values ​​of a responsible business since its launch in 2013. It believes that being a responsible company in Slovakia should be a normal part of business and a way to think about things. It focuses on education, life in the community in which it operates, and gender equality.

Outstanding Employer: IKEA Bratislava – The furniture producer Ikea focuses on tackling domestic violence. It offers the necessary help to gain the courage to overcome difficult times. In addition to psychological and financial support, employees get up to 10 additional days of vacation and the company will apply measures to increase safety at the workplace, such as changing working hours, the place of work or scope of employment.

Good Partner of the Community: Slovak Telekom – The telecom company has won this prize for the second time. Now it was awarded for its initiative focusing on digital skills. The goal of the Enter programme launched in 2020 is to teach children and students not only to consume digital technologies but to create new things with them.

Social Innovative Company: Deutsche Telekom IT Solutions Slovakia – The IT company targets mental health and psychiatric treatment with its winning project, an application using virtual reality. It enables patients to train cognitive functions in a playful way without realising it.

Fair Market Player - O2 Slovakia – This technological company sensitively perceives the need to combat disinformation and mitigate hate speech on the internet. Its Zdieľaj s Rozumom campaign helped those interested in finding advice and instructions on what to search for when verifying news and how to identify false information.