SaS pulls out of coalition deal, calling on the PM to sack Matovič

The coalition party is prepared to leave the government if no new deal is on the table by late summer. 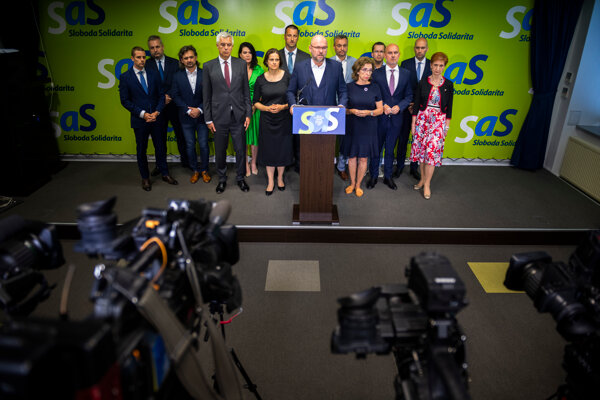 The key members of the SaS party, including four ministers, during a press conference on July 6, 2022. (Source: TASR)
Font size:A-|A+  Comments disabled

Prime Minister Eduard Heger has placed the stability of his coalition government at stake due to his reluctance to remove Finance Minister Igor Matovič from his post.

One of the coalition parties, Freedom and Solidarity (SaS), has announced that it will no longer accept the existing coalition deal starting from July 6, and demands the sacking of Matovič, the least trusted minister according to polls, from the government.

“We can’t continue the way we have until now,” SaS chair and Economy Minister Richard Sulík said during a press conference. Matovič is the biggest problem in the coalition, he continued, criticising the finance minister for the mishandling of public finances.