Danuvina Alacris presents the Roman history of countries along the Danube, to reach Slovakia in early August. 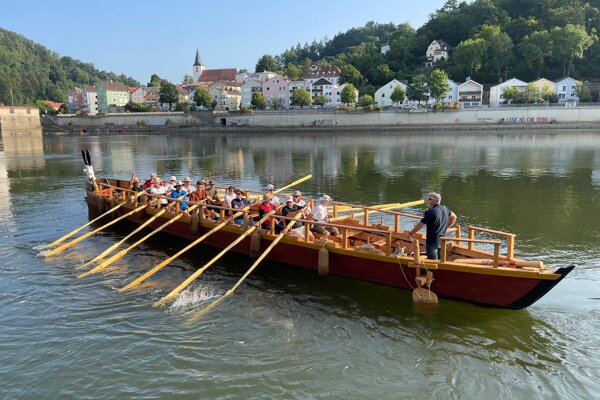 Danuvina Alacris, replica of an ancient Roman boat, on its way down the Danube. (Source: Courtesy of MÚOP)
Font size:A-|A+  Comments disabled

Countries along the Danube River share a common heritage. Almost 2000 years ago, the region around one of Europe's biggest rivers was part of the Roman Empire.

In early August, residents and visitors of Bratislava can have a glimpse into the life of ancient Romans when a genuine replica of a Roman rowing and sailing ship will stop here on its way down the Danube.

“The Roman civilisation significantly influenced further development throughout Europe. We are its heirs,” archaeologist Margaréta Musilová of the Municipal Institute of Monuments Protection in Bratislava (MÚOP) told The Slovak Spectator. “We shall be happy that at least in a small section, on the right bank of the Danube near Bratislava, we were part of it in the first four centuries of our era.”

The building of the ship, called Danuvina Alacris, and its subsequent cruise down the Danube from Germany to the Black Sea mark the international Living Danube Limes project. Slovak partners contributed by developing a mobile app that harnesses virtual reality.